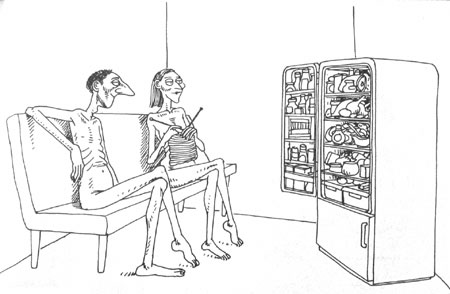 B. Kliban is quite possibly my favorite cartoonist, which is saying a lot, frankly. His ideosynchratic “drawings” (he didn’t always call them cartoons, perhaps rightly so) are not everyone’s idea of funny ha-ha cartoons.

Occasionally his work is immensely funny and hits you like a lightning bolt. At other times you will look at a Kliban drawing in complete bemusement… there’s something there, something you can’t put your finger on that’s tickling you at the base of your brain, but it’s not a “gag cartoon” in the usual sense. Some of his cartoons are obvious and just overtly silly, he loved to stoop to outrageously dumb puns (which I’ll admit I’m a sucker for); but some of them are subtle and wonderful to the point of being sublime.

Like Saul Steinberg, who he apparently admired greatly, Kliban explored ideas in his drawings that make you stop and think and perhaps come away looking at the world just a little bit differently. Some of them are crass; Kliban was a regular contributor to Playboy for many years (and elevated the magazine’s level of cartooning considerably) and was unafraid to “draw what he thought”. He was also somewhat compelled by the marketplace to make sex a topic more often than he might have in another magazine.

Kliban achieved commercial success and recognition with the publication of his first book of cartoons, Cat. This is the Kliban that most people know, and cat lovers and cat haters everywhere think of him as a cat cartoonist. The book is actually quite good and contains some of Kliban’s more whimsical work, intermixed with actual drawings of his own cats. His cat drawings are clever and amusing but never “cute” in the cloying, saccharine Garfield sense. Kliban’s real genius, though, is in a series of “cartoon” books published after that, filled with his marvels of weird, “out of left field”, “pick your brain up and give it a twist” cartoon drawings.

Kliban is essentially responsible for the non-sequiter absurdist style of cartooning that most people think Gary Larson invented with his newspaper panel The Far Side. (I think Larson would be the first to say so and point to Kliban as a big influence.) Even more absurd and surreal than Larson, and at times even funnier that Larson at his best (which is pretty damn good), Kliban was a true original and some kind of bizarre artistic genius.

Unfortunately, inexplicably, unforgivably, most of his wonderful books are out of print and have remained out of print for years, even though his Cat calendars continue to be posthumously produced and marketed (right there that says something about America). However, you may still be able to acquire the books through eBay, aLibris, Amazon or other book search services.

A couple of them remain in print: Two Guys Fooling Around with the Moon is the only one in print of the collections I’m talking about, CatDreams is a collection of his calendar drawings, and of course, Cat (Seventeenth Anniversary Edition) is still available (and certainly worthwhile).

And don’t get me wrong about the Cat calendars, they’re pretty cool, just not Kilban at his best and most bizarre. Here is the official Kliban Cats site (rather annoyingly done in Flash) which has a gallery of his postcard and calendar Cat drawings, and the Kliban.com merchandise site. Hopefully, his family is getting proceeds from these. Here is the Kliban Klubhouse fan site with links.

The site I’m linking to below is a fan tribute site with some of Kliban’s drawings (unfortunately not hi-res images) that may give you a taste of his work and links to articles.