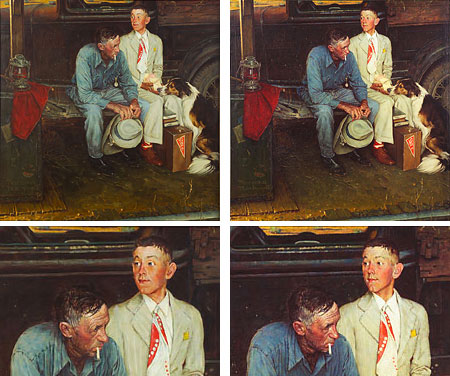 In art, as in philosophy and politics, we’re often presented with the question “What is real?”.

For years experts have been mystified by inconsistencies in one of Norman Rockwell’s most widely recognized illustrations for The Saturday Evening Post, a painting known as Breaking Home Ties (above, left… or is it right?).

The painting originally appeared on the cover of the Post in September of 1954. The original was purchased in 1960 by Donald Trachte Sr, Rockwell’s friend and neighbor, who was himself an illustrator, painter, amateur architect, astronomer and inventor. Trachte was also a cartoonist and drew the Henry Sunday newspaper strips after Carl Anderson’s death in 1948. (John Liney took over the dailies.) It is Trachte’s version of the Henry Sundays that are reprinted in papers today.

Trachte had loaned the Rockwell out for exhibit for years, but over time there was more and more concern that the painting had been damaged in some way, perhaps by an overzealous restorer or cleaner trying to cover unintentional damage at a museum, or even that the painting had been stolen or replaced with a forgery. Those who knew Rockwell’s work well could see that this was just not up to his normal standards, particularly in terms of color and the appearance of the paint in many areas. The painting’s original provenance was unquestionable; it was widely known that Rockwell had sold the painting to Trachte, but the questions remained about how it had come to its current state.

Trachte Sr. died in 2005 and it turns out that the Rockwell on display was indeed a forgery (above, right,… or is it left?), painted by Trachte himself. This was revealed when Trachte’s sons discovered the original (above, left… no, right) in a secret compartment behind a bookcase in the family home.

Donald Trachte Jr., in an interview on NPR yesterday, said that their father had given them no indication that the painting on display was a forgery (or even that he was capable of painting at that level), or that the original was hidden in their house. There is some speculation that the existence of the forgery was related to the divorce of Trachte Sr. and his wife, but no one really knows.

You can see the two paintings in larger reproduction on NPR’s site. There is a nice detailed account on the Berkshire Eagle, and the originals of both paintings are currently on view at The Norman Rockwell Museum.

As for the little guessing game I’ve been playing with you, go to this post’s comment page for the answer.

17 Replies to “The Unreal Rockwell”