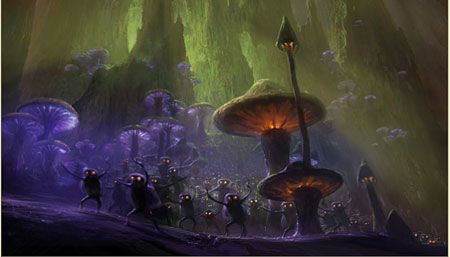 Concept artists provide much of the “imagination power” behind the fantastic images we see in film and games. They provide their services to the entertainment industry in a variety of ways, some work for large production or special effects firms, some for design studios, some independently and some for alliances or “studio groups” of artists and designers with related skills.

Concept artist Mark Sullivan is part of the Ice Blink studio group, led by noted concept artist Doug Chiang. I’ve written posts about several of the groups members, including Doug Chiang, Marc Gabbana and Josh Viers and Bill Mather (who I didn’t even realize was a concept artist at the time of my post).

Sullivan has provided concept art for films like The Hudsucker Proxy, Pleasantville (a treat, if you haven’t seen it), Bugsy, Starship Troopers and The Polar Express. He has worked for Jim Danforth, Dreamquest Images, Industrial Light and Magic and others.

Sulivan credits his exposure at an early age to the original King Kong, and its wonderous multi-plane glass matte painting visions of Skull Island, with sparking his enthusiasm for working in the film and concept design field. His bio describes his early attempts to animate clay dinosaurs in Super-8 in front of crudely painted scenic backgrounds.

I would bet that most artists in the field have a similar story to tell, and now Mark and his fellow Ice Blink artists are fueling the imaginations of the next generation of entertainment industry artists.