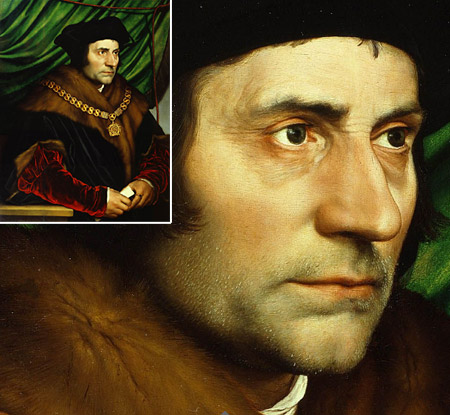 Some artists can be an integral part of, and simultaneously transcend, their times. Hans Holbein The Younger, a Bavarian artist who made his career as a court painter for Henry VIII of England, was one of the foremost portrait painters of the Northern Renaissance and was very much a part of, and in some ways beyond, his times.

I first encountered Holbein through reproductions of his wonderful portrait drawings in an inexpensive Dover book. I was struck by how immediate and precise they seemed, with just exactly the lines necessary, in precisely the position and proportion needed, to absolutely nail the likeness. Bam! No question in your mind that this is what this person looked like. Even though his drawings feel a little formal, they seem remarkably modern in some ways.

Not long after discovering his drawings, I found that his paintings were no less impressive, painted with a precision and technical mastery that also seems suprisingly modern, and can still wow you even after being exposed to centuries of subsequent painters.

Holbein’s remarkable portrait of Sir Thomas More (above), Henry VIII’s diplomatic envoy and Privy Councillor and later Lord Chancellor of England, had impressed me in reproductions for years before I had the opportunity to see it in person at the Frick Collection in New York. I was still stunned by it.

The painting is large, 29 x 24″ (75 x 60 cm), and the life-size visage of the subject is imposing, with an almost physical presence. Closer examination of the painting just adds to the impressiveness of Holbein’s mastery. The velvet sleeves look as though they must be actual velvet that you could reach out and touch, and the texture of the other cloth is remarkable as well. The face and hands are rendered with a confident virtuosity that is just astonishing.

Holbein has many other notable paintings and one stands out in particular. The Ambassadors is remarkable for a number of reasons. Enough so, in fact, that I think I’ll make it the topic of a separate post.

Holbein, conveniently enough, apprenticed to his father, Hans Holbein the Elder, who was also a painter of note, straddling the transition from Gothic to Renaissance styles. Holbein the Younger was firmly in the Northern Renaissance and clearly influenced by the masters of the Italian Renaissance. There is some debate as to whether he actually traveled to Italy to acquire that influence first hand, but his mastery seems to suggest more than a second hand exposure.

You can still buy the very inexpensive Dover book that got me going on Holbein: Holbein Portrait Drawings, as well as more expensive volumes on his paintings, like Hans Holbein the Younger: Painter at the Court of Henry VIII by Stephanie Buck, Jochen Sander, Thames, Hudson.

If you’re tempted to think of Holbein’s painting of Moore as looking “photographic”, keep in mind that it predates Niépce and Daguerre’s first attempts to capture a photographic image with silver iodide by more than 300 years.

14 Replies to “Hans Holbein The Younger”