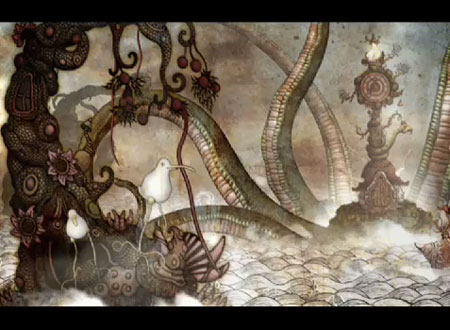 When I first wrote about fascinating South African artist and illustrator Ree Treweek last month, and tried to describe her intricately detailed and wonderfully original drawings, I mentioned that she and her artist’s group (collectively known as “The Blackheart Gang”) were working on animating some of her drawings from a series called The Tale of How, which in turn is part of a larger scale project called The Household. (See my post about Ree Treweek from March 15, which includes links to more of her work.)

At the time there was a brief bit of teaser video of the animated work available on Brian Goodwin’s site, but The Blackheart Gang has recently posted a larger and longer clip, much to my delight.

I was already impressed with the unique look of Treweek’s illustration, but combined with the interesting way the images have been isolated into parts and animated, with the addition of cgi and lots of imaginative thought, the resulting animation is something really original and wonderful.

Treweek’s Blackheart Gang collaborators are Jannes Hendrikz (who sometimes collaborates on her illustrations), musician Marcus Wormstrom (still haven’t found the music video on which the group also worked together), and animators Justin Baker, Brian Goodwin and others (credits at the end of the clip).

I initially encountered some problems with the downloaded movie file (see “Site Quirks”, below), but it works fine in a browser and if you have a broadband connection, it’s definitely worth viewing. When this is released it’s going to make a stir in the animation community.

In the meanwhile, we have a double treat. We get to enjoy Treweek’s wonderful drawings both as drawings and as part of The Blackheart Gang’s fantastic animated world.

6 Replies to “The Tale of How”