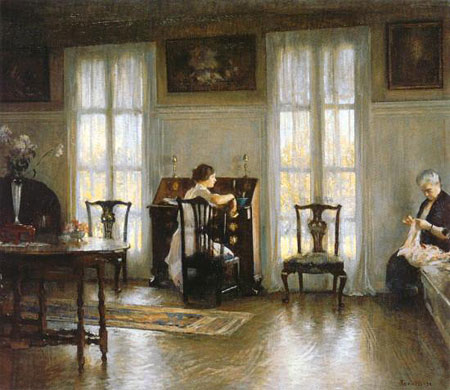 Regular readers of this blog will know that I have a particular fondness for painters who combine the light and color, painterly approach and immediacy of the Impressionists with the solid foundation and draughtsmanship of realism.

Examples would include John Singer Sargent, Gustav Calliebotte, Joaquin Sorolla and Anders Zorn. To that partial list, I would add many of the “American Impressionists”, and in particular Edmund Charles Tarbell.

In addition to painting landscapes and interiors, Tarbell was an illustrator and a portrait painter. He was also an influential teacher at the Boston Museum School, but the impact of his approach to painting extended to many of his contemporary artists and subsequent generations of American painters working in the Impressionist style. His influence on painting in Boston was so dramatic at one point that many of those who followed his teaching and methods were called “Tarbellites”, and the style he exemplified and led came to be known as “The Boston School”.

Tarbell’s plein air paintings of garden scenes and women in fine dresses with parasols strolling paths or relaxing in boats on sun-dappled waters are as rich with splashes of pure pigment and the dazzling play of light and shadow as many of the French Impressionist canvasses. However, Tarbell usually kept shy of actually exploding his image into the flurry of separate brushstrokes that Monet would use at the extremes of his style.

As much as I like his bright exterior scenes, it is Tarbell’s darker, more subtle paintings of room interiors that contain the real magic for me. At times they are an obvious exploration the compositions of Vermeer, showing women seated at tables, surrounded by objects like vases and paintings, immediately in front of a window that bathes them in light, like Girl Reading, Girl Mending or Girl Crotcheting.

My favorites, though, are interiors in which there is a longer view of a room, with light spilling in from windows and washing over polished wood furniture and floors, as in Mother and Mary (above).

His painting Across the Room looks as though it belongs in a series with similar “more floor than room” compositions by Degas and Caillebotte.

It’s difficult to tell how rich and extraordinary these paintings are from small reproductions on the web. I had the opportunity to see a wonderful traveling exhibit of Tarbell’s work titled Impressionism Transformed – The Paintings of Edmund C. Tarbell, organized by the Currier Museum of Art, that visited the Delaware Art Museum, and then the Terra Museum of American Art, in 2002.

There is a catalog from the exhibition that is very nicely done, relatively inexpensive and serves as a good introduction to his work. There is also a nice volume titled Edmund C. Tarbell: Poet of Domesticity by Laurene Buckley.

The painters referred to as American Impressionists are often thought of as “second string”, merely followers of the “real” Impressionists. In fact, they were simply painters who were influenced by the French movement, and adopted some characteristics of the style they admired into their own unique explorations. No one exemplifies this more than Edmund Tarbell.