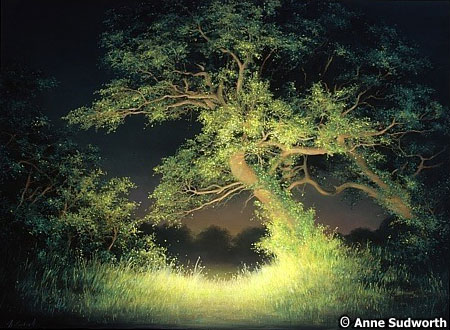 From yesterday’s post about the magic of sunlight interacting with objects, we move into a different kind of magical light, the enchanted light in the mystical paintings of British fantasy artist Ann Sudworth.

Her intricately detailed pastel paintings often feature night scenes in which multiple or individual trees are sharply illuminated by a mysterious light source that is invisible to the viewer. The light is sometimes white, often green from the cast of the foliage, but rendered with naturalistic believability. The resultant effect is one of eerie realism.

Sudworth also does subjects that are almost straightforwardly realistic, often landscapes in moonlight, although the moonlight is sometimes unnaturally bright and the landscapes are occasionally of mystical places like Stonehenge. One of her pastels is of Furness Abbey, a frequent subject of etchings by J.M.W. Turner.

At times, she combines her mystically illuminated trees with her fascination for preternaturally bright moonlight, creating compositions reminiscent of Magritte’s Empire of Light paintings.

Sudworth tried several other mediums before gravitating to pastel, which fascinated her and gave her a feeling of direct contact with the work: “…you don’t need any implements to apply it, just your fingers”. She says she doesn’t visit galleries or study the work of other artists often, but is fond of the work of Arthur Rackham, among others.

She does create some images that seem more in the traditional fantasy realm of fairies, wizards or mythical animals, but the images that dwell on the border of the two realms of naturalism and fantasy seem her primary focus.

All of her works are woven together with the common thread of the mystical, ethereal qualities of light.