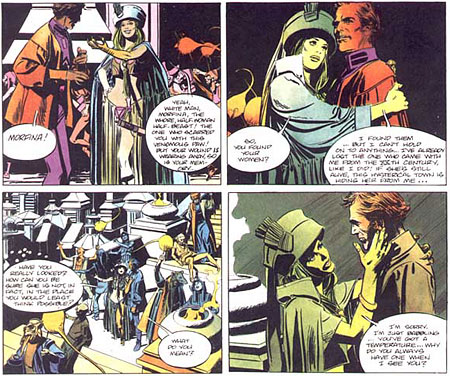 I learned from The Comics Reporter that Paul Gillon’s 80th birthday was last Thursday (May 11, 2006). Gillon has a long and distinguished career as one of the preeminent creators of bandes desinnées – French comics (literally: “strips of drawings”). Along with Jean Giraud (Moebius), Gillon was one of the first artists I encountered when I discovered the delights of French comics.

Gillon’s career was largely as a newspaper strip artist. For thirteen years he drew the daily strip 13, rue d l’Espoir (13 Hope Street), a soap opera comic, written by Jacques and François Gall and drawn by Gillon in a sophisticated realistic style in the tradition of Alex Raymond’s Rip Kirby.

Gillon sometimes puts me in mind of another soap opera newspaper strip artist who went on to comic-book stye work: Stan Drake, the under-appreciated American artist who worked for years on The Heart of Juliet Jones newspaper strip and later did the excellent graphic story albums of the Kelly Green detective series. Ah, but there’s a subject for another post.

There are English language versions of some (but not nearly enough) of Gillon’s work, notably Lost in Time: Labyrinths (with an introduction by Alex Toth, and from which the image above was taken), Lost in Time: Cannibal World and Survivor.

All of Paul Gillon’s work is distinguished by high standards of draughtsmanship, composition, characterization and comics storytelling.