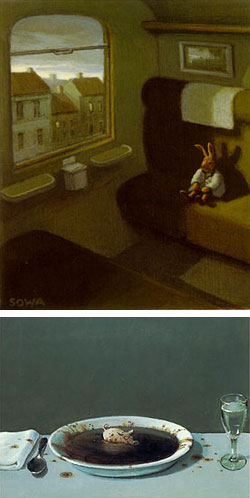 There is a world in which pigs dive into ponds like olympic athletes, play with balls of string like cats or wallow in your soup bowl, sheep work as accountants in the meadow, cats return to the door with their arms in a sling, dogs attend Victrola concerts, rabbits stand on their ears as street performers, wear trenchcoats and ride bicycles, and Guinea hens wear pearl necklaces.

It is the world of German artist and illustrator Michael Sowa, whose mildly surreal images tweak your brain just enough to make you stop and smile.

Sowa is obviously influenced by the logic-teasing juxtapositions of Rene Magritte, to which he adds an affection for charmingly painted childrens book scenes and a bit of pop culture.

There is a collection of his art: Sowa’s Ark : An Enchanted Bestiary, and there are children’s books by Axel Hacke for which he did the illustrations: A Bear Called Sunday and The Little King December.

Sowa has also done a little bit of movie production art, notably for Wallace & Gromit in The Curse of the Were-Rabbit, for which he did production art, and the charming Le Fabuleux destin d’Amélie Poulain (The Fabulous destiny of Amelie Poulian, released in the U.S. as simply Amelie), for which Sowa did matte painting and provided images that were used in the film (on the wall in Amelie’s bedroom). This post was prompted obliquely by the fact that Audrey Tautou, who was the delightful lead in Amelie, is currently appearing in The DaVinci Code (in which she gets to do very little).

Most of the art available on the web for Sowa is in the form of posters and note cards, So I’ve given links below to some of those sites. His work in never reproduced big enough, but at least you can get a glimpse into that world where giraffes take canoe rides, rabbits ride trains, sushi rolls swim in the ocean, men take dog-sized elephants for a walk, birthday cakes are launched from catapults, rhinos play the trumpet and, oh yes,… pigs fly.