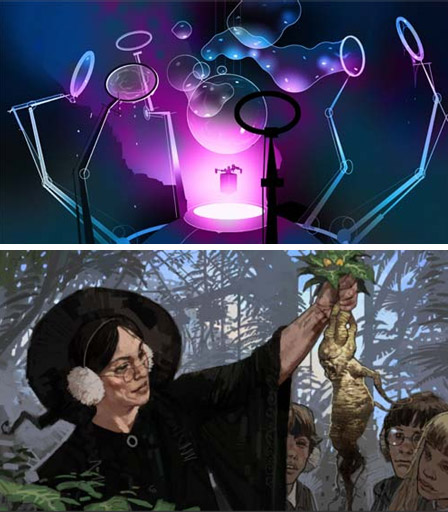 Dermot Power is a concept artist and designer whose work not only has a wonderful degree of variation from project to project, but who also exhibits an unusual flair and style in many of his concept paintings.

He was done stage, prop, character and costume designs, and concept paintings and drawings for films like Charlie and the Chocolate Factory (image at top), Batman Begins, Harry Potter and the Prisoner of Azkaban, Harry Potter and the Chamber of Secrets (image above), Star Wars: Attack of the Clones, Leprechauns, Fear Dot Com and others.

His style ranges from straightforwardly realistic to highly stylized, but always seems appropriate to the material he is visualizing.

His site includes concept art and design work from many of the films as well as some storyboards for Prisoner of Azkaban and Fear Dot Com. Some of his most stylized work is for Charlie and the Chocolate Factory, for which he did set designs, props, merchandise art, character and creature design as well as film visuals.

Power is also a comics artist and has done work for the UK comics magazine 2000AD on characters like Judge Dredd and Slane. If you search Amazon.com you can find collections of those titles that include his work.

In addition he has done game design and concept art for Virgin Games (Wonderland, Overlord, Golden Axe) and Konami (Lure of the Temptress).

If you look through his work in the various arenas, you can see the skills of character and costume design, the ability to design and render environments and the language of of visual storytelling that cross over into the seemingly separate disciplines of film design, storyboarding, game design and comic book art.