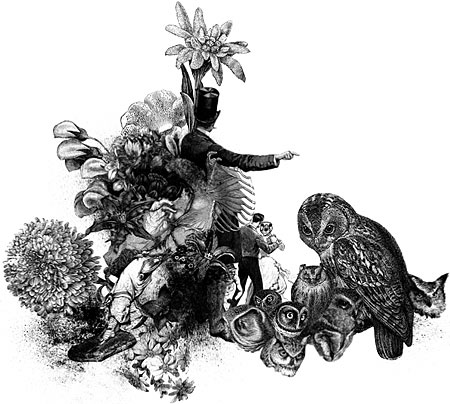 Any of you who are familiar with Dover Books, know what a great resource they can be of public domain images from previous centuries, particularly from the 19th century when thousands of engravings were published for novels, texts, catalogs and periodicals.

Many artists have used the Dover collections of these images as reference. Other artists have made more direct use of them to make new art.

Artist Caleb Johnston has taken a number of these examples of 19th century publishing technology and put them together in a 20th/21st century publishing technology, namely a Flash interactive, and produced a work in which these detailed engravings of people, plants, animals, anatomical diagrams and decorative letterforms animate, morph, and dissolve into one another in novel ways.

The module is interactive in that it depends on you move your mouse around to find “hot spots” within each image tableaux, and click on them to trigger animated sequences. Click, or re-click, on enough of them in a given image and you will trigger a progression to the next collage in the sequence.

The piece is nicely done although it does require a bit of perseverance to get some of the screens to “complete” and move on to the next one.

NFCTD is a wonderful diversion reminiscent of a cross between Max Earnst’s classic Surrealist collage-novel Une Semaine du Bonté, from the early 20th century, and the famous Nose Pilot Flash amusement that has been popular on the web for the last 8 or nine years. It presents an interesting juxtaposition of images, times, technologies and artistic visions.