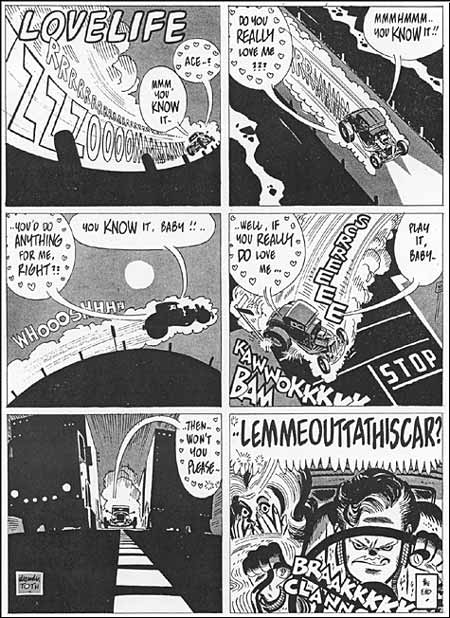 To say that Alex Toth was a master of the comics art form is perhaps an understatement.

I first encountered his uniquely elegant and spare drawing style in issues of Pete Millar’s CARtoons and Drag Cartoons, drag racing and custom car oriented comics magazines in which he stood out like a Corvette in a parking lot full of Chevy sedans (image above). I then noticed his unmistakably fresh style in the pages of Warren’s Creepy and Eerie. Again, Toth shone like a midnight sun, even among the Warren magazines stable of superb comics artists.

Toth (pronounced like “both”) had a rare ability to abstract and simplify in his drawings to a degree that makes his work seem a bit like Chinese ink paintings or Japanese prints; not in any obvious similarity of style, Toth’s drawing style is as American as can be, but in accordance with the difficult-to follow maxim of “What doesn’t add, subtracts.”

In his pursuit of capturing the essence of things with very few lines, Toth brought to bear his superior draughtsmanship and his exceptional skills as a designer. His panels are composed, elements arranged, blacks spotted, white space controlled and figures and backgrounds drawn or simply suggested with a skill that passes into the sublime. Where the majority of comics artists, even the most accomplished, would use 5 lines to describe something, Toth would do it with two. Where they would draw a detailed object, Toth would suggest with deceptively simple areas of black or halftone.

His pages, particularly in black and white, were textbook examples of treating an entire comics page as a carefully designed whole, not just an arrangement of panels. Within that balanced and carefully arranged design, Toth exhibited storytelling skills, the ability to convey a story in images, that were among the best of the best. Like his drawing, his storytelling was dramatically different, unique, daringly cinematic and uncannily effective.

Toth originally wanted to do newspaper comics, but adventure comics were fading from the newspaper pages when he started his career, so he switched to comic books. He carried on the artistic tradition of newspaper comics greats like Milton Caniff and Noel Sickles, however, and was the main artist to bring that dramatic chiariscuro style to comic books, where it has been continued and championed by artists like Frank Miller.

Toth was also a terrific character designer and left his mark on the beautifully simplified characters for Space Ghost, Johnny Quest and the DC Comics series Super Friends.

Here is an excellent gallery of his work presented in black and white, from scans of the original art on the Comicartville site.

There is a multi-volume series of books on The Art of Alex Toth from Auad Publishing (where you will also find a Toth gallery), and you should still be able to find the Image Comics collection of his work on the comic book adaptation of the Zorro television show.

This post on Toth has been on the back burner for a while now. When I can, I like to let the posts on the artists who are at the very top of their artform simmer a while, in case I think of something else good to say; but I brought this post forward and finished it because Alex Toth died yesterday (May 27, 2006) at the age of 77. In what is probably as fitting a way to go as any artist could hope for, Alex Toth literally died at his drawing table.