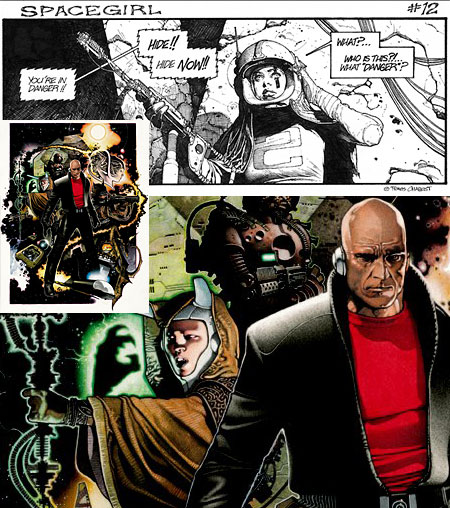 Over years I’ve been enjoying comics I’ve noticed that many comic book artists get to a certain level of proficiency and “hold” there, evidently feeling that they have sufficient skills to turn out acceptable work on a continuing basis.

I’ll certainly grant that drawing a 24-page comic book on a monthly schedule can be a demanding task, and is not always conducive to creative explorations and artistic growth. Some comic book artists, however, are not satisfied with “good enough” and insist on growing and changing, rising above the limitations of the monthly schedule, even if it makes them incapable of keeping up that pace.

Canadian comics artist and illustrator Travis Charest (pronounced “sha-RAY”) started his career working with Jim Lee and the Homage Studios stable of artists. His early work shows the influence of the Homage style at the time, rife with over-muscled, grimacing superheros and a rendering style thick with superfluous hatching (sometimes referred to as “hay” by those who took a dim view of that inking style).

Charest soon outgrew that niche style and began to exhibit the influence of comic art greats like Al Williamson, Alex Raymond and Jean Giraud (Moebius). As he matured as an artist, he kept a high level of detail and hatching, which he seems to enjoy, but he graduated from lines for their own sake to a sophisticated rendering style more reminiscent of classic pen and ink illustrators.

He has done comics work and covers for Wildstorm on titles like WildC.A.T.s and for DC Comics on Flash and Darkstars, among others (checklist here). He gradually moved away from monthly comics, unsuited to the level of work and detail in his images, and began to do specials and covers, developing a detail-oriented painting style in the process.

There is an Unofficial Travis Charest Art Gallery site that includes galleries and features lots of convention sketches. His “official” site seems to be a MSN discussion group, The Art of Travis Charest, which includes tutorials, news and galleries (note the gallery sub-categories in the navigation bar on the left).

Also on that site is a delightful comic strip that Charest is posting to the web called Spacegirl (image above, top).

Charest almost apologizes for Spacegirl, saying: “This is just a bit of fun I get to have for an hour a week, don’t take it too seriously.”, but it is among my favorite of his endeavors. Perhaps because it’s “off the cuff”, his art for Spacegirl is wonderfully loose and has a freedom not always evident in his more polished work. Plus it has an Alex Raymond meets Moebius look to it that I just love, as they are probably my two favorite comics artists.

Charest left Wildstorm and made a logical move to French comics publisher HumanoÃ¯des AssociÃ©s, publishers of Metal Hurlant and home to many of Europe’s top comics artists. (The American branch is Humanoids Publishing). There he is currently working on a Metabarons graphic novel (promotional image: above, middle and detail, bottom) that has been a long time in development and promises to be spectacular.

As always, Charest continues to push himself to new levels of accomplishment, never satisfied with “good enough”.

Link via the heights of sublimation