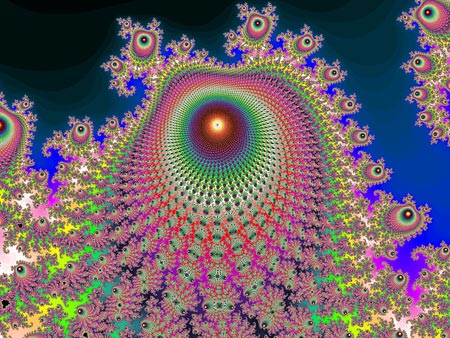 Benoît Mandelbrot is not an artist in the usual sense of the word. He doesn’t work with oils, watercolors, pastels or colored pencils, yet he has created work of extraordinary beauty.

Benoît Mandelbrot is a mathematician. He coined the term “fractal” in 1975 to describe a shape that appears similar at all levels of magnification. Fractals occur in nature. Go to Google Maps and look at the satellite photo of a large river, then zoom in on the branches of the river, then the creeks feeding those branches, and the runs feeding the creeks. The branching and convoluted shapes of the shorelines remain similar at every level. Similarly, look a a naked tree in the winter and see the relationship of large branches to smaller and smaller branches.

The nature of cloud formations, seemingly too complex for traditional geometry and mathematics to describe, is revealed to be an expression of fractal geometry. (I played with this idea in this page from my webcomic several years ago, in which the background includes “clouds” made from a fractal image, and explained the process here.)

Mandelbrot worked with this branch of math and in the process created one of those wonderfully simple and elegant mathematical expressions, like Einstein’s “E=Mc2”, that is incredibly far reaching. “Beauty” and “elegance” are terms used in mathematics to describe particularly simple yet powerful equations or expressions. Mathematical beauty can create in human beings a feeling of fascination, satisfaction and “rightness” similar to the perception of visual or musical beauty. One of the simplest expressions of Mandelbrot’s “set” is: Z = z2 +c, in which the equals sign would actually have small arrows top and bottom pointing in opposite directions.

The arrows on the equal sign indicate that the equation can be processed in either direction, and the result of one operation can become the start of the next, ad infinitum, in a process known as iteration. This process generates 2 numbers, changing over time, that can be used to plot a position on a surface, like map coordinates. If you let the process iterate and assign colors to the way the points change, you can generate an image of the Mandelbrot set (image below, top). Zoom in on that image and you descend into beautiful infinity.

The border of the Mandelbrot shape is a fractal; not only does it posses an infinity of detail as it is magnified, its length is infinite. The fractal geometry along the border of the set displays fantastic intricate patterns, and if you continue to zoom in on the image, you find endless variations of pattern and color. The image above is from Wikipedia and was generated by David R. Ingram, (high resolution version here).

Of particular fascination is the fact that as you zoom into a Mandelbrot image you will find familiar patterns, particularly smaller versions of the somewhat heart-shaped black center of the Mandlebrot itself, that repeat at various levels. (image below, left, also from Wikipedia).

If you zoom in far enough on the edges of those mini-Mandelbrots, you will encounter a subset of smaller Mandelbrots. Zoom in on those and you will find even smaller repetitions of the set. In the mathematical cosmos of the Mandelbrot set, this goes on forever in a mind-boggling infinite “Russian nesting doll” relationship.

PBS has been running a fascinating documentary on this subject, Colors of Infinity, narrated by Arthur C. Clarke (book version here). There are also many resources on the web. Some describe the process, some are about Mandelbrot himself, some are beautiful galleries of fractal and Mandelbrot set generated images, and some are small Java applets that let you generate your own fractal and Mandelbrot images.

Many of the patterns generated by these astonishingly simple mathematical operations are hauntingly familiar. Look through a few fractal art galleries and then think of oriental rugs, Persian decorative patterns, Indian mandalas and paisleys and other patterns familiar in psychedelic art.

This raises some always fascinating questions about the nature of art and beauty. Could it be that we are hard-wired to the universe, our brains genetically tapped into Jung’s images of the “collective unconscious”, and are those hard wired images indicative of the fractal nature of the physical world? Benoit Mandelbrot has given us a beautiful clue.