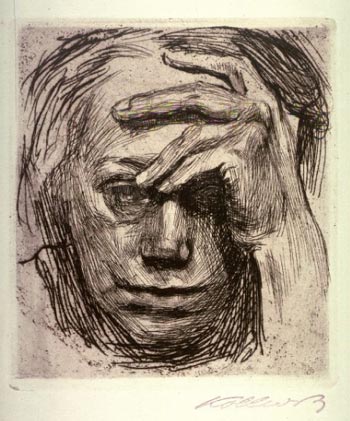 German artist Käthe Kollwitz began her career as a painter until, inspired by the prints of Max Klinger, she began creating etchings, lithographs and woodcuts, eventually abandoning painting for graphics.

Kollwitz was also a sculptor and her drawings and graphics have a distinctly sculptural quality, as if rough-hewn from wood or stone.

Her subjects were “rough” as well, often drawn from the poor and downtrodden in Berlin, who her husband attended as a doctor. She remained committed to pacifist and socialist ideals throughout her career. Much of her early work in particular was shaped by the death of one of her sons in the First World War.

She was the first woman elected to the Prussian Academy of Art, a post from which she was ejected by the Nazi Party, who also forbade her to exhibit; although they used some of her work for propaganda and included her in their derisive exhibition of “Degenerate Art”.

Through it all, she continued to create, and her work, even when portraying grief and tragedy, resonates with an uncanny strength.

There is an exhibit of her prints, posters and drawings at the CSU Art Museum in Long Beach, California from June 23 to August 5, 2006. Unfortunately there isn’t an online gallery accompanying the exhibit listing.

There is a Käthe Kollwitz museum in Berlin that has a gallery of her work.

The Fine Arts Museum of San Francisco has over 60 images of her work in their online image base, including the image above (detail here).