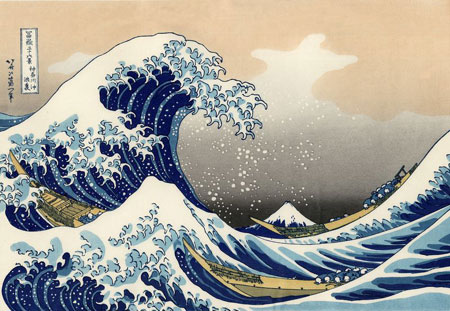 When I write these posts, I take the approach of describing artists from one tradition or genre to readers who are coming to lines and colors with an interest in a different area, in the hope that I can introduce you to something that you might not have encountered otherwise.

Even so, I usually try to avoid images that those familiar with the artist would consider a cliché because they are that artist’s “hit single”, and find treasures that are less frequently seen.

Some images, however, are simply too strong to resist.

Katsushika Hokusai’s In the Hollow of a Wave off the Coast at Kanagwa (from a series Thirty-six Views of Mount Fuji), commonly known in the West as “The Wave”, is one of the most recognizable images in all of art. It is certainly the most widely recognized image of Japanese art in the Western hemisphere, and many think of it as the archetypical example of a Japanese print.

Ironically, Hokusai is possibly the first Japanese printmaker to introduce elements of Western art into Japanese printmaking, incorporating Western-style perspective, shading and lighting effects learned from smuggled European prints at a time when contact with Western culture was still forbidden.

So the Western artists, notably French Impressionists like Monet, Degas and Toulouse-lautrec, and American artists like Whistler, were entranced and influenced by the Japanese prints of Hokusai, the first Japanese artist to become popular in the West, who in turn had absorbed influences of European printmakers like Rembrandt and van Ruisdale.

Hokusai represents a nexus between the art traditions of East and West, whose development until that time may as well have happened on separate planets. Hokusai had a tremendous impact on the course of Western art and is, in fact, more highly regarded in the West than in Japan. He was uncharacteristic among Japanese artists in other ways. He was a rebel, a restless individualist, changing homes, and names, frequently throughout his career. Katsushika Hokusai is not his actual name, simply the one most recognized. One of his later works was signed “The Art-Crazy Old man”.

In the Hollow of a Wave is such a remarkable image that it has become an icon, like the Mona Lisa or Van Gogh’s self portraits, at once familiar and still unknown. Often incorrectly thought to represent a tsunami, it is actually a scene of fishermen encountering one of the dangers of their profession, large offshore waves called okinami.

A wave yes, but more than that, Hokusai’s wave is alive, it’s foamy crest breaking into grasping fingers, its troughs and crests swelling and falling as if the sea was breathing, and the sea spray flying like clouds of fireflies.

The image is even more remarkable for its composition. Hokusai was a master of “negative space”, the areas of an image where the objects are not. This was a characteristic that particularly enthralled the impressionists. 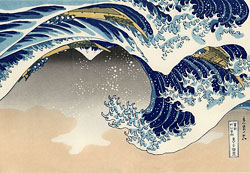 Beyond that, many have pointed out that the two waves together, the one that is “there” and the one that is “not there” form a pattern uncannily like a Taijitu, or “Yin Yang symbol“, the ancient Chinese icon representing the balance and blending of the duality of light/dark, positive/negative and masculine/feminine believed to form the foundation of existence.

Whether this is intentional on Hokusai’s part is unknown, but his powerful compositions, delicate colors and beautifully finessed lines can captivate today as easily as they did before the turn of the last century.

I was disappointed to learn that I missed an exhibit of Hokusai’s work at the Sackler Gallery of the Smithsonian, itself a remarkable nexus of art from East and West, that ended in May,

I’ll list some online resources below, and there are several excellent books available, including Hokusai by Gian Carlo Calza and Hokusai: One Hundred Views of Mt. Fuji, edited by Henry D. Smith.

I’ll leave you with Hokusai’s wonderful quote about his development as an artist throughout his life:

“From the age of six I had a mania for drawing the shapes of things. When I was fifty I had published a universe of designs. but all I have done before the the age of seventy is not worth bothering with.

At seventy five I’ll have learned something of the pattern of nature, of animals, of plants, of trees, birds, fish and insects. When I am eighty you will see real progress. At ninety I shall have cut my way deeply into the mystery of life itself. At a hundred I shall be a marvelous artist. At a hundred and ten everything I create; a dot, a line, will jump to life as never before.” — Hokusai