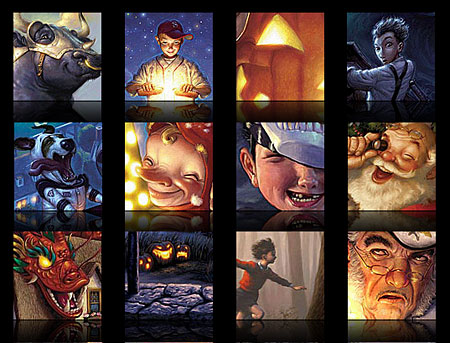 I first wrote about illustrator Tim Jessell and his “realistic with a twist” style in this post back in October of 2005.

Since then, his site has been completely redone and the Portfolio section expanded with larger versions of his editorial and advertising illustrations for the likes of Time Magazine, American Airlines, Nike, Polaroid and Apple Computer.

His style is at once varied and consistent, changing with his subject but retaining a foundation in realistic painting and solid draftsmanship. Browsing his portfolio, you can find a straightforward portrait next to a fearsome dragon in from the Droon series next to lighthearted children’s fantasy.

His new galleries also feature a display gimmick that I’m a sucker for, showing a “reflection” of each image as if the painting was sitting on a dark reflective floor. The effect is repeated on the gallery thumbnail page and I’ve chosen to use a section of that here, rather than try to choose a “representative” image among his broad variety of subjects.