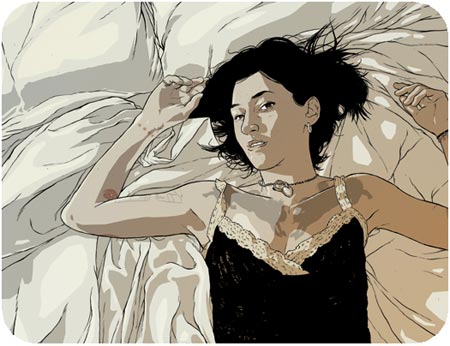 I really enjoy the work of young artists, whether still in art school, recently graduated or on their own independent course of learning. There is a particular appeal to that part of an artist’s development when their style and approach has not yet “hardened” into a set path.

Illustrator and comics artist Matthew Woodson is a recent graduate of The School of the Art Institute of Chicago.

His sometimes stark, sometimes poetic images are spare, usually consisting of linework and a few tones of gray or muted color. He works in pen, brush and ink, occasionally with the addition of color in gouache and frequently with color added digitally in Photoshop.

His subjects are people, often portrayed with unflattering directness and occasionally in compositions that don’t include the head, studies of natural objects like plants and animal skulls, and landscapes.

His site features comics as well as illustration, including a story called “Tendergrass” that was published in the Flight 2 anthology.

I can’t give you direct links to his site sections because his web site is in frames (for no apparent resaon). His site (and business?) is called “ghostco”, the introductory page for which informs us that most of his work can’t be displayed because of contractual limitations, but promises more in the future. My thought is that his progress will be worth watching.

Link via The Art Blog, which included a “Bonus Link” to Woodson’s “How to Ink Like an Idiot” tutorial on deviantArt.