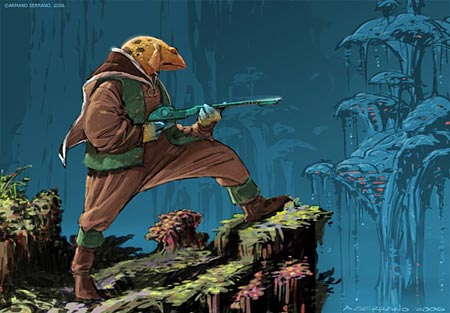 Armand Serrano is a visual development artist for Sony Pictures Animation. He started out with FilCartoons, a subsidiary of Hanna-Barbera, on projects like The New Adventures of Johnny Quest, Young Robin Hood and Pirates of Dark Water. He then moved to with Philippine Animation Studio (PASI), supervising layout for Marvel TV animation like X-Men and Fantastic Four. Then it was on to 7th Level, Inc, a multimedia and gaming company and then to Walt Disney Feature Animation Studio, where he worked on on Mulan, Tarzan, Lilo and Stitch and Brother Bear.

He occasionally works in ink and wash, Photoshop and even oil, but most of his production work is nicely toned and atmospheric work done in graphite on paper or Priamacolor Pencil on vellum.

His site includes galleries of production art, layouts and illustrations, as well as a few landscape drawings and a section of life studies. The gallery setup is not the best (see my comments below), but Serrano also has a blog on which it is easier to see some of his images.

Serrano is also part of Sketchclub and is a participant in the El Pacifico collaborative improvisational comic book experiment along with Marcelo Vignali and Marcos Mateu.