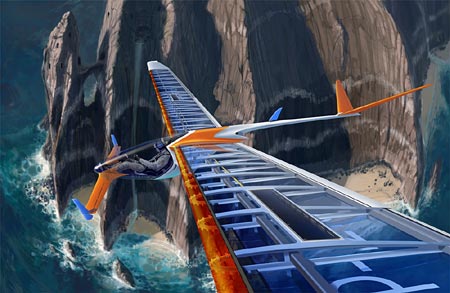 Long way around to point out that concept artist and designer Scott Robinson specializes in vehicles. He does paint environments and other types of concept art, but vehicles are his thing, and that includes all kinds of vehicles – cars, bikes, trucks, prop planes, jet planes, helicopters, sci-fi craft, boats and even retro-futuristic steam locomotives.

His web site, DrawThrough, has galleries of both his professional and personal work, a bio, information about workshops and instructional DVDs.

His work displays a masterful understanding of perspective and the geometry of objects, refined draughtsmanship and beautifully appropriate rendering technique. Don’t miss his wonderfully fanciful renderings of futuristic bicycles.

In addition to work on films like Minority Report, Robertson has also done a lot of product design for companies like Nissan, Volvo Yamaha, Raleigh Bicycles, Fiat and Nike. He teaches drawing at the Art Center College of Design and is an instructor with the Gnomon Workshop, which carries a number of his instructional DVDs.

Robertson founded the publishing company Design Studio Press which specializes in instructional art books, and publishes titles that feature several of the concept and sci-fi artists I’ve profiled on lines and colors.

One Reply to “Scott Robertson”