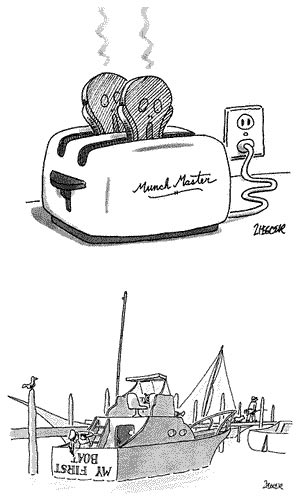 Jack Ziegler is, of course, quite mad.

Some may say it’s toaster mania, some may suggest worst case wonkiness, but I know, because I have a treasured copy of the long out-of print classic cartoon collection of the same name, that it’s Hamburger Madness!

Jack Ziegler has been drawing cartoons for The New Yorker, and other publications since slightly after the invention of movable type. Do a search on the Cartoon Bank archive of New Yorker cartoons and you come up with over 900 Ziegler cartoons!

His deliriously loopy cartoons careen back and forth from Kliban-like lunacy to Steinberg style thought provoking drawings to traditional New Yorker style boardroom cartoons – with a twist. The twist is the point, of course, some of his “gags” bend logic in a way that would have made Ernst or Duchamp sit up and take notice.

Ziegler’s drawing is exactly what a cartoon drawing should be, hilarious in its own right, dead on with facial expressions and body language, always clear and sharp and delivers the gag like an exploding California roll in an uptown sushi bar.

Even though his classic collections like Hamburger Madness, Worst Case Scenario and Marital Blitz, and his one children’s book, Mr Knocky, are out of print, you may still be able to find used copies.