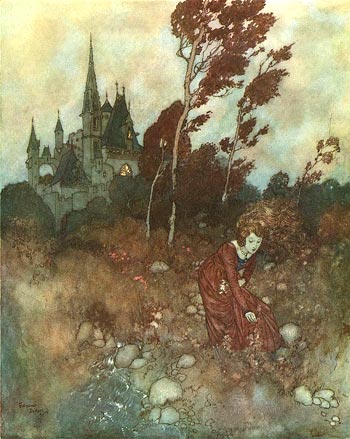 French illustrator Edmund Dulac began his career in the first decade of the 20th Century, just as the new technology of color separation was making the economical printing of color book plates possible.

Dulac moved to London because of the publishing opportunities and was soon working as an illustrator in the new genre of illustrated gift books, in which color plates, printed on special coated paper that accommodated the new printing process, were “tipped in”, or placed between pages rather than being bound into the spine.

His style shows some obvious influence of Arthur Rackham, an influence that eventually traveled both ways, and I think he and Rackham were probably influenced by Swedish Illustrator John Bauer.

However the influences travelled, the result was that Rackham and Dulac became the dominant figures in this new area and developed wonderful illustration styles that still enchant readers today.

Unlike Rackham, who was making a transition from the old color process , in which a black ink line was needed to “hold” the color and hide the effects of misregistration of the color plates, Dulac started with the new, more accurate process which allowed him to work without the ink lines, which he did for many of his early works, working largely in watercolor and gouache. He eventually came to use outlines more as a nod to the expectations of the market than a technical limitation.

Dulac did memorable illustrations for classics like The Arabian Nights, The Rubiat of Omar Kayyam, and fairy tales like The Sleeping Beauty, The Snow Queen, Cinderella,, Little Mermaid, and Bluebeard. He also illustrated an edition of Shakespeare’s The Tempest, and The Bells and Other Poems by Edgar Allan Poe.

Dulac’s charming, beautifully drawn and wonderfully colored images are what fairy tale illustration is all about.