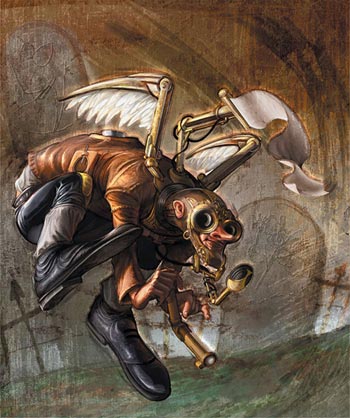 As mentioned last week on Drawn, Bob MacNeil is a multi-talented illustrator and concept artist with a wide variety of styles.

An illustration of his was given a special spotlight in back of the new Flight 3 comics anthology, along with an inspirational story about dealing with tragedy and almost giving up on being an artist.

Fortunately for us, he didn’t give up and is creating illustrations and concept art for a number of projects for toy companies, gaming and TV development, including the new season of Venture Brothers from the Cartoon Network.

He is trained in traditional media. Having worked for a few years in acrylic and oil he made the leap to digital drawing and painting some years ago and finds the speed and flexibility of the digital mediums advantageous.

His approach ranges from highly rendered to simplified and cartoonlike, realistic to highly stylized, indicating an adventurous attitude toward exploring and growing as an artist.

MacNeil also has a blog (with the wonderfully simple name of Bob’s Log, which makes it seem like the term “blog” was invented just for him). The blog often features discussions and step-through demos of his working process.

In addition to the mention on Drawn, MacNeil was recently interviewed on Design Inspiration.