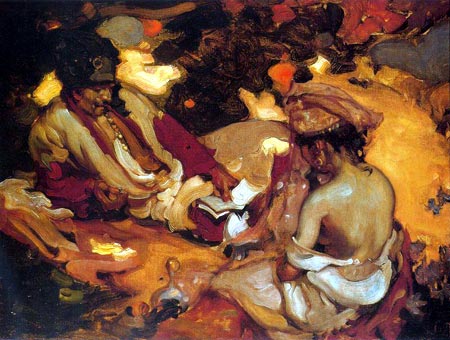 Frank Brangwyn was a unique and individualistic painter, water colorist, illustrator, muralist and graphic artist who is hard to categorize. Critics had difficulty classifying him while he was active and writers still have difficulty today. Unfortunately, he often unjustly winds up in the “forgotten Victorian painters” bin.

From the grays of his early marine paintings, to the rich but muted colors of works inspired by his study of the Dutch masters, to the explosion of light and color that ensued when he followed the popular fascination with “Orientalism” and traveled to Turkey, Spain and Morroco, his style and palette evolved thorughout his career.

Brangwyn was extraordinarily prolific, creating some 12,000 works. In addition to paintings and watercolors, he created wonderful etchings, woodcuts and lithographs, as well as designs for architecture, interiors, ceramics, jewelry and stained glass. He did numerous book and periodical illustrations and book plates. He also designed posters and was a sought-after muralist, creating dramatic and controversial murals for notable spaces in the UK.

His murals were an inspiration to the renowned American illustrator Dean Cornwell, who took three years off to travel to England to study and work with Brangwyn before tackling his commission for the murals at the Los Angeles Public Library.

Brangwyn was also one of the artists, like Thomas Eakins, Maxfield Parrish and Elizabeth Shippen Green, to experiment early on with the use of the new medium of photography for composing studies for paintings.

His more colorful works utilized broad impressionistic brushstrokes and brilliant hues. His work was influended by, and in turn, influenced, the major art movements of his time: Victorian neo-classicism, the Pre-Raphaelites (he originally studied with William Morris), Art Nouveau and Impressionism.

He received numerous awards and prizes and was eventually knighted. When asked about his place in the art world, Brangwyn described himself simply as “a designer”.

Thanks to Carl Critchlow for the suggestion.