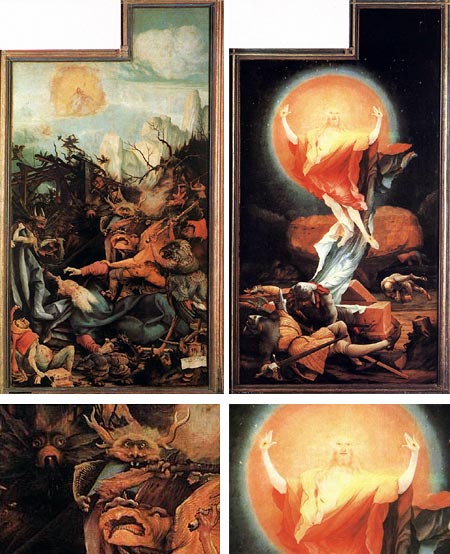 Little is known about German Renaissance painter Matthias Grünewald. Few of his paintings and drawings survive, and there is very little biographical information. His name, in fact is not even Matthias Grünewald, but Joachim von Sandrart, but his miss-identification as Grünewald by a writer in the 1600’s stuck.

What is known, however, is the undeniable visual and emotional power of his work. At a time when the European artist’s role was largely in service to the church, and needed to visually impress the doctrine upon a congregation that could not read it for themselves, Grünewald’s emotionally charged images did so with a vengeance.

The images shown here are from Grünewald’s undeniable masterpiece, the Isenheim Alterpiece, originally done for the hospital chapel of Saint Anthony’s Monastery in Isenheim in the Alsace region of France, and now in the Musée d’Unterlinden in nearby Colmar near the current French German border.

The altarpiece is a multi-leveled construction, unfolding in three levels. I’ve seen it, and similar multi-leveled altarpieces, referred to as the Renaissance equivalent of hyper-media.

The top layer of 4 panels shows the crucifixion, concentrating on an agonizingly visceral portrayal of suffering. It opens into a striking series of panels portraying the nativity, some painted into a dramatically detailed trompe l’oiel architectural framework, and the stunning image of the resurrection shown above right, in which the holy aura is portrayed in almost psychedelic intensity, with the force of it hitting the soldiers in the foreground like a wave of special effects in a modern movie.

It often occurs to me that paintings like this were the equivalent of modern special effects spectacle, even more so, to a populace that often lived in harsh circumstances and would only be exposed to painted imagery in the churches.

When the second set of panels were opened, they revealed the innermost set, two panels and a sculpted relief in the center. The rightmost panel, directly under the panel of the resurrection, portrayed the temptation of St. Anthony (above, left) with an astonishing array of monstorous, demented figures that strongly recall the horrific visions of Hieronymous Bosch, another visionary artist about whom little is actually known.

Grünewald was a mystic and the symbolism and messages inherent in all of the panels are still a matter of much scholarly discussion. Ruth Mellinkoff has suggested, in fact, that Grünewald has painted Lucifer as one of the angels in attendance at the nativity. Weird and fascinating stuff.