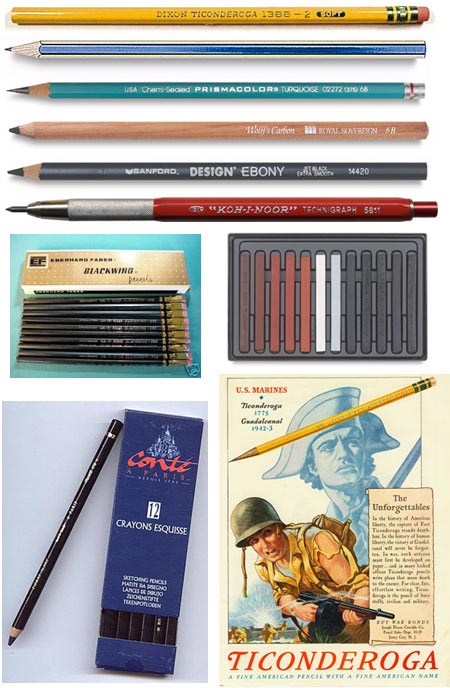 It’s often said that the greatest joy comes from the simplest things.

In these days of gel pens, precision markers, synthetic brushes, high-tech plastic paints and digital painting software, it’s easy to overlook the humble pencil, which was actually something of a technological marvel itself at one time.

Pencils were created after the first major deposit of pure solid graphite was discovered in England sometime in the 1500’s. The graphite was first thought to be coal (which it technically is), and then, because it didn’t burn easily, mistakenly thought to be a form of lead. It was initially used for medicinal purposes and then to line cannonball molds; and for a while its use for anything else was strictly controlled and export forbidden (war before art, as always).

It was soon realized that the new substance (which, like diamond, is an allotrope of carbon created under high pressure and heat) was useful for making marks, hence the name graphite.

The first graphite pencils (from the latin pencillus, “little tail”) were made in Keswick, England by wrapping rough pieces of the graphite in sheepskin. One of the early uses, in fact, was for marking sheep there in the countryside where the graphite was discovered.

It was the Italians who first encased the graphite in wooden holders (the modern form of which uses incense cedar), and Dutch traders who spread the new drawing instruments to artists throughout Europe.

In 1795, during the Napoleonic wars when English pencils were not available to the French, Nicholas Conté, an officer in the French army, discovered that mixing amorphous (powdered) graphite with fine clay and firing the mixture in a furnace could produce a substitute for the rare solid form from the original English deposit, (which was the only such deposit known and would eventually run out in 1890).

In addition, Conté realized that altering the proportions of the clay to graphite mixture produced varying degrees of hardness. Conté originally pressed the graphite and clay mixture into sticks, called Conté Crayons, setting them apart from other drawing and writing crayons, which were chalks; and the mixture itself was called Conté. Modern Conté Crayons (image above, middle right) ironically are refined versions of chalk crayons.

Eventually Conté’s mixtures were encased in wood, as with the Engilsh solid form of graphite, thus producing the modern pencil as we know it today.

Pencils have had a colorful history in the social, political and scientific realms as well as in art. In recent times, famous pencil brands and models have come and gone with great devotion from artists and writers alike, from the legendary Eberhard Faber Blackwing 602 (a favorite writing tool of John Steinbeck and Tom Wolfe, also loved by artists, now discontinued and selling on eBay for up to $20 each), to the Sanford Design Ebony Pencil (smooooth), to the good old Dixon Ticonderoga (inexpensive and great).

There are all manner of mechanical pencils too, of course. One of my favorite forms of pencils for drawing is the 2mm leadholder, or drafting pencil (red Koh-I-Noor model shown above), which I wrote about in this post and is a favorite among professional comic book artists.

There are some good books on pencil drawing. Some of them are unfortunately out of print classics, but still available: The Art of Pencil Drawing by Ernest W. Watson, and my personal favorites (but perhaps a bit dated looking for some) Rendering in Pencil and Pencil Drawing Step by Step by Arthur L. Guptill. (Together they are the Watson and Guptill of Watson-Guptill art book publishers.)

Below are a number of links to pencil related sites and blogs from my bookmarks; particularly note The Pencil Pages, a large site with lots of pencil info that includes reproductions of classic pencil advertisements (above, right), and the Pencil Revolution blog, which is devoted to increasing appreciation of this humble marvel of drawing technology.