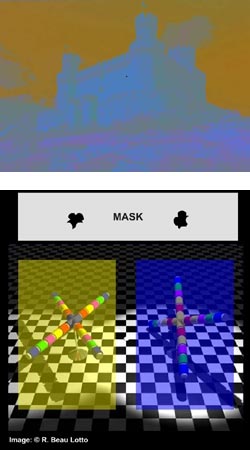 Here are a couple of interesting diversions that dramatically illustrate the degree to which color perception is controlled by the effect of previous or adjacent colors.

The first, Big Spanish Castle, is a simple, but dramatic and fun, color-based optical illusion. Based on the visual effects of complementary colors and the optical/brain phenomenon known as an afterimage, the illusion is similar to others in which these principles are used, as in the American Flag illusion on the Wikipedia page for afterimage.

In this case, however, the effect has been cleverly combined with a photograph for a fun and striking effect.

Go to the page linked here, and below, which is posted by graphic designer John Sadowski. There you will find a larger version of the image at top-left. Stare at the dot in the center of the image for 30 seconds (the one on the linked page, not the one here) and then, without moving your eyes, mouse over the image; and you will see what appears to be a color photograph. Once you move your eyes, however, you will find that the photograph is, in fact, black and white. Fascinating.

Sadowski gives links to instructions for creating your own version of the illusion (requires Photoshop), and a list of various versions of the illusion that people have sent in.

The second, which is one of three color perception demonstrations on e-Chalk (image at left, bottom), is one of the most dramatic examples I have seen of how adjacent colors affect the perception of the value and hue of a color.

Choose the “illusion 1” button at the bottom of the page. The interface requires Flash (which you probably have) and allows you to move a dragable mask over the image, isolating two parts of it that look initially to be radically different colors, dark blue-gray and bright yellow, but are demonstrated to actually be the same color. The effect is quite dramatic. The other two experiments are similar in nature.

There is also a related image on the Wikipedia page for optical illusions that demonstrates the same principle, but with the value of a gray tone. It requires a bit more work on your part to view the proof but the effect is also striking.

All of them demonstrate that color, like beauty, is in the eye of the beholder.