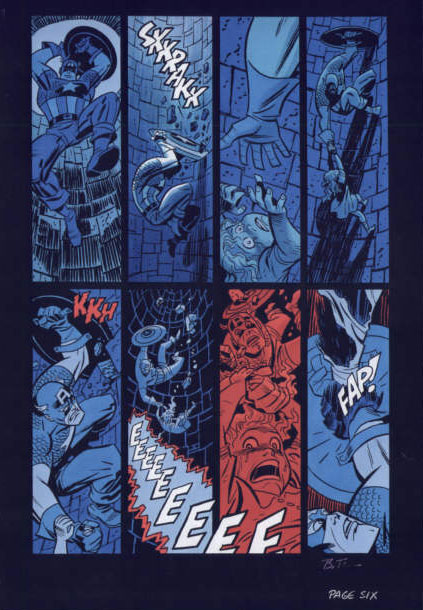 I wrote about Bruce Timm in this post last October. It’s been almost a year and, although he still doesn’t have a personal website, there is a significant amount of additional Timm material on the web, mostly on unofficial galleries.

Timm is an animator, producer and comics artist. He is most widely recognized for his work on the DC Comics TV animated series like Batman, Superman, The Animated Series, Batman Beyond, Justice League Unlimited and Teen Titans, through which he has had a substantial impact on the look and feel of modern TV cartoon animation.

His drawing style, whether for character sheets, convention sketches or comics pages, has a lively, energetic feeling and a wonderful sense of stylization. He gives his figures and faces a cartoon-like exaggeration, drawing from classic animation, cartoon-style comics, such as the Archie comics of the 50’s and 60’s, and the so-called “good girl art” of the “cheesecake” calendars and book covers from the same era. He has also been very influenced by Jack, “King” Kirby (more about him in a future post) and other comic art greats.

The page shown here is from the story “An Epic Battle”, written by Darko Macan and drawn by Timm, and is from the hardbound anthology Captain America: Red, White & Blue from marvel Comics (more details here). It evidences Timm’s admiration for Kirby as well as giving a delightful nod to the Captain America and Agent of S.H.I.E.L.D. stories of Jim Steranko, another comics artist who was very influenced by Kirby. You can see more of these pages on PopCultureShock.

Most of the sites linked below are unofficial galleries or collections of convention sketches. There are also some interviews.

There is a collection of Timm’s work, Modern Masters Volume 3: Bruce Timm available from TwoMorrows Publishing.

Note: Some of the sites linked here contain teasing nudity and sexually suggestive material (i.e. NSFW). Avoid them if you’re likely to be offended.