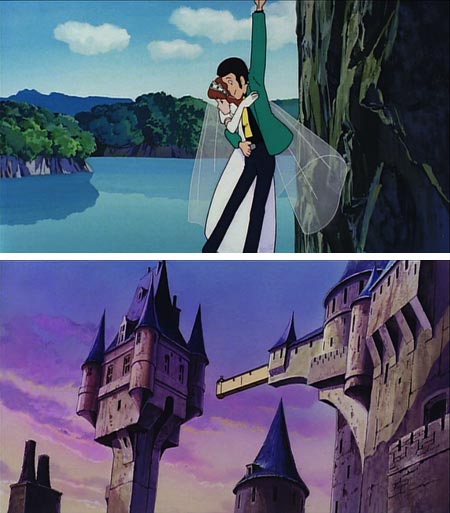 Released in 1979 and soon overshadowed by films like Nausicaa, Laputa and Totoro, The Castle of Cagliostro is often overlooked in Miyazaki’s oeuvre, but undeservedly so. It’s a terrific film and one of the most fun adventure movies I can recall, animated or otherwise.

It doesn’t have the extraordinary graphic sophistication of Miyazaki’s mature work, but the backgrounds are lush and beautiful, there are intimations of the wonderful landscapes that would grace his later features and the staging and “cinematography” are excellent. (I realize “cinematography” isn’t quite the right term for animation, but I don’t know what else to use to describe the elements of composition, “camera movement” and cutting that are the equivalent of photographed films.)

You’ll also see hints of Miyazaki themes to come: wonderful flying craft, mysterious castles, dramatic landscapes and a fascination with the architecture of European cities. Also Miyazaki’s beautiful drawing, rich color and striking use of night and twilight scenes are very much in play.

You won’t find the sophisticated and thought provoking themes of Miayazaki’s later works, but in their place we have a superb lighthearted adventure fantasy that has much of the feeling of those great 1960’s spy thrillers and thief caper movies.

Although it’s part of the Lupin the III series, the story works just fine on its own. Brash, goofy and adventurous Arséne Lupin III, professional thief and inveterate playboy, is equipped with enough gadgets, wisecracks and casually reckless daring-do to make James Bond jealous. In the course of the movie he encounters a beautiful princess, an evil count, secret passages, traps, guards, Interpol agents, former lovers, car chases and all manner of other great adventure movie fare. It’s all played out against beautifully realized settings and is artfully staged and timed.

A new print of the film that has been released by Manga Entertainment. (Unfortunately, Manga’s Flash-based site that doesn’t allow for a direct link to the info for this film.)

The new print is beautiful. The picture quality is excellent. The colors are rich and vibrant and the linework is crisp and clear. The subtitles and dub are quite good and much closer to the spirit of the original than the VHS version from the early 90’s.

The one gaff is that Manga has inexplicably cut the film’s beautiful original opening sequence and replaced it with a montage of stills for the opening credits. (What were they thinking?! Just play the English credits before the full, complete film!! Hello?!)

Anyway, don’t let that lapse in judgement, or the poor choice in DVD cover art, dissuade you from appreciating this version. It’s still the best English language release of this wonderful film. Manga released a version in 2000 that had some other problems, make sure you look for the new one.

If you think you don’t like anime, perhaps because your impression of it is limited to giant battle robots, senseless, herky-jerky fighting amid frenetic motion lines, incomprehensible magical creatures and triangular-faced characters with enormous eyes, you should let Hayao Miyazaki show you how limited and inaccurate those impressions are; and allow him give you a taste of what you’re missing. The Castle of Cagliostro can be a great place to start.

5 Replies to “The Castle of Cagliostro”