Pop artist Roy Lichtenstein was most famous for his large canvasses in which he reproduced bits of popular advertisements and, in particular, panels from comic books, complete with renderings of oversize process color dots.

As much as I enjoyed seeing representations of comic panels displayed large, I always had a problem with Lichtenstein’s use of them. My most basic objection was the fact that he was treating them the way Warhol treated soup cans (and also comic panels), in that there was an assumption that the act of isolating and painting them as he had was elevating them to the status of “art”, with the tacit assumption, of course, that they were not art in the first place.

This is not an assumption I endorse, obviously. Comic art (or graphic narrative if you want a high-tone term) is as viable an art form as any form of visual art or literature, and is actually the unique and special point where those two otherwise separate forms of human expression join.

So, despite the fun gee-whiz campy color dot fizz of it all, Lichtenstein’s uncredited swipes (as they are called in comic circles) from comic book artists’ work did not please me.

Not only did the panels not need to be “elevated” to the status of art, Lichtenstein’s renderings of them (image above, right) were flat, lifeless and seemingly clueless to the appeal of the original panels (above, left). This is possibly deliberate on his part, but the effect is a drab one regardless, and I have never seen anything from Lichtenstein that demonstrates an ability to draw as well as even the least talented second string comic artists whose work he cavalierly “borrowed”.

This is evident when you compare his renditions with the original comic panels, a process that has been spotty and difficult in the past but is now facilitated by a project called Deconstructing Roy Lichtenstein by David Barsalou.

Barsalou has painstakingly found assembled and documented the original comic panels (and other sources) on which Lichtenstein based his panels.

I should point out that Barsalou probably does not share my attitude toward Lichtenstein’s work, and in fact, probably has the opposite opinion. I don’t want to seem like I’m putting words in his mouth.

His project, however, is a treat for me, because it makes it easier to say: “compare the originals”. 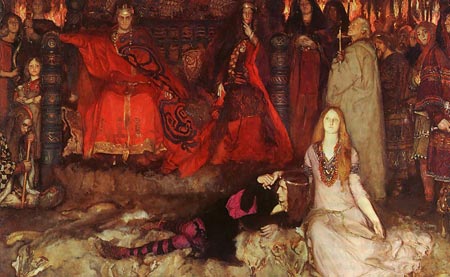 He paints quickly realized, direct and painterly images of the California landscape in the area around where he lives; and frequently posts the paintings to his blog. He works primarily en plein air and sometimes supplements the outdoor work with reference photographs and further work in the studio.

He works in a muted, often dark palette, punctuated with brighter areas and splashes of color that sometimes become the focal point of the image and sometimes push the darker forms forward. He says in his recent posts that he is trying to move toward abstraction, stepping slowly through more flattened and geometric forms in his paintings from life.

Personally, I’m sorry to hear that, because I really like the balance he has already achieved between natural forms and abstracted blocks and chunks of color. His paintings read well as compositions, with large areas of light and dark balanced against bits of texture and detail. His brushstrokes are obvious and forceful, his subject matter is pulled from the everyday and overlooked rather than the picturesque, and his color choices owe more to Expressionism than Impressionism.

Wray has a background in animation and comics and is familiar to many for his work with painted colors on the Ren and Stimpy Show, as well as comics work for Mad Magazine and on Hellboy Jr. with Mike Mignola.

You can see a little of that history in the “springyness” of his forms at times, but most of the influence on his work seems to come from other California plein air painters, the Expressionists and the immediate nature of the California landscape itself. 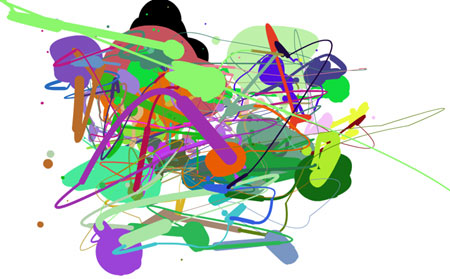 Ever wanted to be Jackson Pollock, indulge in “Action Painting”, be the darling of the smart set and express your existential angst by throwing paint at the canvas?

JacksonPollock.org is a web site by Miltos Manetas that lets you do just that, at least virtually. It’s a Flash-based interactive in which you can spatter, drip and blob colors onto your virtual canvas to your heart’s content, whiling away those tedious hours that could be spent doing something ridiculous, like working.

Like Mr. PicassoHead, JacksonPollock.org is essentially a fun diversion based loosely on the characteristics of the work of a famous painter.

It opens with a blank screen, with no indication of what to expect until you happen to move your mouse, and then… color happens! Based on the Flash interactive, “Splatter” by Michal Migurski of Stamen Design, the interactive responds to movements of your mouse (or stylus – Wheeee!) with lines, blobs and swaths of color. Drag, click and create! Click to change colors. Click and hold to get bigger blobs. No art training necessary!

And you don’t even get paint on your pants. 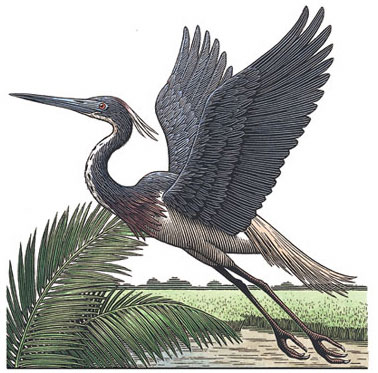 Scratchboard is the inverse, or “dark side” (I couldn’t resist) of pen and ink drawing, in which a specially prepared board, coated with a thin layer of white clay, is used as the foundation for the drawing. Large areas of (usually) black ink are then painted onto the board, allowing the artist to scratch crisp white lines out of the black ink. There are special scratchboard tools, multi-pronged scratchboard “rakes” and so on, but any sharp instrument can be used.

Scratchboard is often combined with traditional pen and ink drawing on the same surface, as in the work of illustrator Virgil Finlay, and sometimes combined with color, particularly in some modern illustration. There are also artists, like Chet Phillips who mimic the effect with “digital scratchboard” in Corel Painter.

Traynor is an illustrator, formerly based in Delaware and now in Massachussets, who has done editorial work for companies like Simon & Schuster and Random House, publications like The Wall Street Journal, Fortune and Esquire and advertising illustration and logo design for companies ranging from American Express to Coca-Cola.

Vyle is the professional pseudonym for concept artist, art director and designer David Levy. He works primarily in the gaming industry and is perhaps most noted for his work on Prince of Persia. He has also done work in the film industry.

Vyle seems to work primarily digitally, usually in Photoshop and sometimes back and forth between Photoshop and 3-D graphics. His site includes “tutorials” in the form of short movies that fade through a progression of images from various stages of the work. (Some of them require the latest version of DIVX, others are in AVI.) Among them is a short movie of the process for creating the image at left, bottom.

His simultaneously loose and detailed style reminds me a bit of artists like Craig Mullins and Feng Zhu (also here).

The galleries on Vyle’s site feature corporate work, notably gaming concept and environment designs, but as I often do, I find the most interesting work in the images done for his own amusement to personal projects in the “Homework”, Speedpaintings” and “Archives” sections.

“Speedpainting” is a fun idea and is common among concept artists who work in digital painting. The flexibility, plasticity and quick color mixing available in digital painting allows very rapid application of color, and artists often create “timed” paintings as a challenge to themselves, and occasionally as friendly rivalry amongst their colleagues (see my post on Barontieri).

In Vyle’s case, his practice of speedpainting pays off in the freedom and spontaneous feeling carried into his more fully realized work. I think it also helps artists in his profession to stay limber and creative when they are very often called on to have “imagination on tap”.