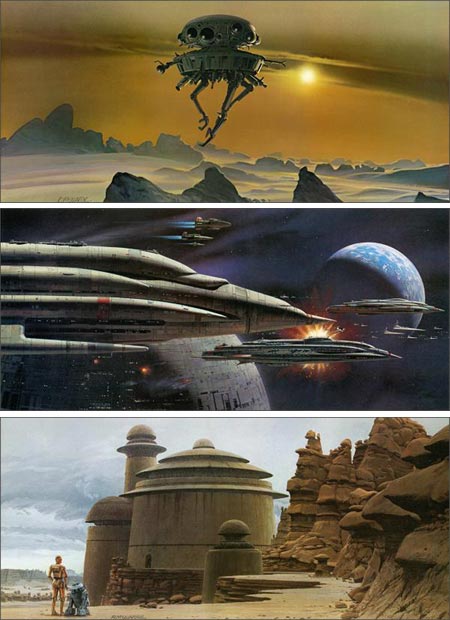 Ralph McQuarrie, although now retired, had a long and distinguished career as a pioneering and influential concept artist for the film and TV industries. He is most noted as the design consultant and conceptual artist for the original three Star Wars films.

It’s hard to overstate the impact he had, not only on the look and design of those three films and all of their attendant phenomena, but on the subsequent generation of concept artists, and the style, influence and role of concept artists in the film industry in general.

McQuarrie also worked on films like Close Encounters of the Third Kind, E.T. The Extraterrestrial, Total Recall, Indiana Jones and the Raiders of the Lost Ark and Cocoon, for which he won an Academy Award.

He did not work on the last three Star Wars films. The story is that years after the original triolgy, when the new “prequels” were being discussed, McQuarrie was asked to participate, but was so impressed with the work of the team led by ILM concept artist and design director Doug Chiang, he declined, saying that he didn’t have much additional to contribute. I doubt that would have been true, but it was, of course, his decision to make.

McQuarrie is a contemporary, and school mate, of another visionary designer and futurist, Syd Mead.

Early in his career, McQuarrie created “real” space art, as a technical illustrator for The Boeing Corporation and as an illustrator for CBS News during coverage of the Apollo space missions, in some ways picking up the mantle of pioneer space artist Chesley Bonestell. You can see some of this art on his site in the “Early Days” gallery. It was this work that attracted Lucas’ attention when he was planning the first Star Wars film.

You’ll also find other Film and TV work in the galleries, including concept art for the original Battlestar Galactica TV show that looks better than the show itself ever did.

You’ll find McQuarrie’s work in numerous books associated with the Star Wars movies, including several that are essentially showcases of his art for particular movies. (Amazon link

His site also has extensive galleries of his work on all three of the original Star Wars films. You will be tempted to look at his vivid, beautifully realized images and say “That looks just like a scene from the movie.”, when, in fact, it was the movies that came out looking just like McQuarrie’s paintings.

Addendum: Dreams and Visions Press has sent out a pre-release announcement of a new book: The Art of Ralph McQuarrie, a 400 page retrospective of his career. The book is a limited edition (2,000 copies) set for release in May of 2007. Pre-orders will begin in January of 2007 and ship in April. See the web site for more details.