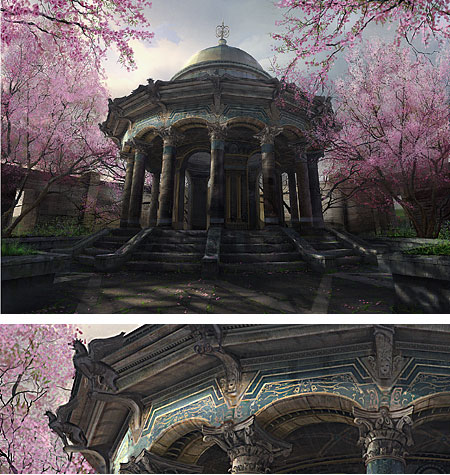 John Wallin Liberto is a matte painter and concept artist based in Sweden who works in the film and gaming industries. He has worked films such as Harry Potter and the Prisoner of Azkaban , Tim Burton’s Big Fish, Riddick and Alien Vs Predator, done video concept art for the Shania Twain “Gonna Getcha Good” music video, and is currently working on games like the upcoming Gears of War from Epic Games.

He is well known on computer graphics forums like Sijun and The GCSociety, where he goes by the handle of Capt.FlushGarden.

Liberto paints digitally in Adobe Photoshop and Corel Painter, moving between the two based on effects he wants from certain tools. He uses the digital painting medium to advantage, particularly in giving his richly detailed images a feeling of realistic texture and a sense of tactile surfaces. Notice the underside of the arches and overhangs in the image of the round temple above.

This painting (details here on CGSociety) is one of several online from his work for the new Gears of War game. You can find others by going to the gallery section for Gears of War on his site. (I can’t give you a direct link because the site is in Flash.)

Liberto, who is sometimes referred to as simply John Wallin, is also involved with the D’Artiste: Digital Painting volumes from Ballistic Publishing.

There isn’t much bio or techinque info on his site, but there is an Interview on MAX3D.pl. (The “Next” link from page 2 is broken. Page 3 is here.)