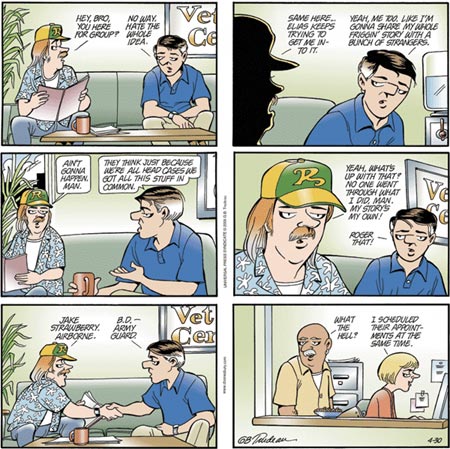 When I first came across Doonesbury I was a bit put off. I just didn’t like the drawing. The figures lacked geometry, the linework seemed weak and I just didn’t get the dark circles under the eyes thing.

I was ready to toss it off as another example of the declining state of newspaper comics in the latter half of the 20th Century, but… the writing was brilliant.

So it’s not the art per se that I admire about Doonsebury, but Trudeau’s masterful use of the comics medium, which consists, of course, of both pictures and words.

Trudeau wasn’t the first to carry sophisticated political satire to the comics page, Walt Kelly’s amazing Pogo was taking on McCarthyism and other issues of the day long before Michael Doonesbury first moved into B.D.’s dorm room, but Trudeau has done it with a depth, boldness and dogged persistence that is just amazing.

A lot of time has passed since the inception of the strip, and Trudeau and Doonesbury, along with the rest of us, have gone through some changes. Over the years the quality of the strip has waxed and waned, but remained generally high, and I gave Trudeau a lot of credit simply for passing the seven year mark.

It seemed to me that, while unfunny comics like Beetle Bailey or Hagar the Horrible could go on forever, the strips that were actually funny to me, like The Far Side, Bloom County and Bill Watterson’s brilliant Calvin and Hobbes, demanded so much of their creators that they went into burn-out mode after six or seven years, went on hiatus, returned for a year or so and then retired altogether from the grind of doing a daily comic.

For a brief time, several years ago, I was in discussion with Jay Kennedy of King Features over the possibility of doing a strip, and in the process I realized that it was something I couldn’t do. I couldn’t write a funny (to me) gag comic strip every day, 365 days a year. I don’t know how the funny ones actually do it, even for seven years.

Trudeau not only passed the seven year mark, (though he did take a hiatus) he’s carried on for 35 years and shows no sign of letting up, In fact, after some years of weaker strips, Doonesbury has bounced back, revitalized and reinvigorated by a storyline in which Trudeau has attempted to tackle the complexities of the life of returning disabled veterans. He took one of his longest running characters, the college football star B.D., sent him to Iraq (again) and let the war send him home an amputee.

The storyline has evolved over the last two years in a way that is strikingly complex, richly human and funny to boot, all within the space of those four tiny panels every day.

This is so far above the warmed-over oatmeal that passes for comics writing in most newspaper strips these days that it boggles the mind.

Through it all Trudeau himself has been something of a shadow figure, shunning publicity and refusing interviews. Gene Weingarten, a writer for the Washington Post, has finally gotten to hang with Trudeau for an extended period and has produced an insightful and fascinating article called Doonesbury’s War, about Trudeau, and in particular, his involvement with the returning disabled veteran storyline to which he has become so dedicated. It’s a fascinating read, and even if you don’t agree with Trudeau’s political stance, you may find the story worthwhile and enlightening.

Weingarten hosts a regular onine chat for tha Post called Chatological Humor, and the transcript of the one on Trudeau is posted here.

In the course of the original article Weingarten talks about Trudeau’s efforts to improve his drawing, dispels the rumors that he no longer draws the strip (the strip is inked by his assistant Don Carlton, but Trudeau continues to draw it himself) and delves into his deadline anxiety and the other issues any daily cartoonist must deal with.

Over the years Trudeau’s drawing has gotten more sophisticated, improved dramatically in fact, but I have to admit I still don’t like it much, and I still don’t get the dark circles under the eyes thing, but… the writing is brilliant.

One Reply to “Garry Trudeau”