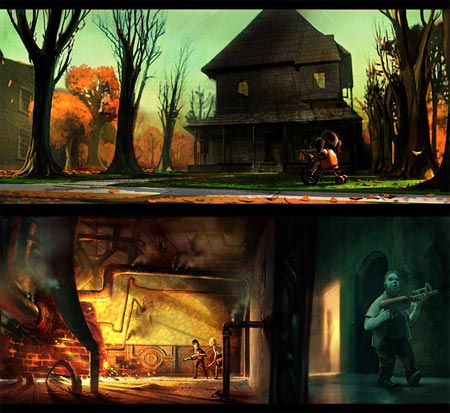 I chanced on Chris Appelhans from a two-month old link from John Nevarez’s blog, did a little digging and found that he is being widely mentioned at the moment. Good thing because his own site has some yummy art but very little actual biographical or background info.

Chris Appelhans is a visual development artist who, among other projects, worked extensively on the new movie Monster House. His previsualization art for that movie is particularly striking (images above), and there are a number of images from the project on his site.

There are also images from an upcoming project that is an adaptation of Alice’s Adventures in Wonderland which apparently takes place in a modern urban/sci-fi setting called Underworld. Art from these and other projects can be accessed from Appelhans’ Portfolio page, along with landscape sketches, doodles and an animated Superman short.

There is also a link there to the archive of his series of short webcomics, frank and frank.

Appelhans is featured in the Art of Monster House book and is a contributor to the Flight 1 and Flight 2 comics anthologies.

There is a nice post on Stainless Steel Droppings which indicates that Appelhans is a Pixar employee and goes into more detail on his current and upcoming projects. Appelhans is also an instructor for the Gnomon School of Visual Effects.

One Reply to “Chris Appelhans”