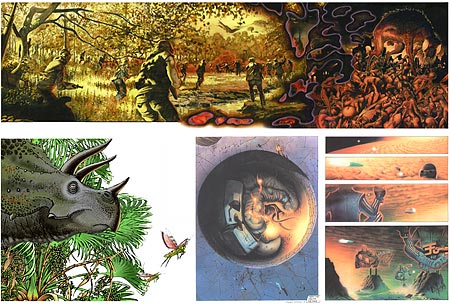 Malcolm McNeill is an illustrator, concept artist and comics artist based in New York. His work has appeared in publications like The New York Times, National Lampoon and titles for Marvel Comics.

McNeill was collaborating with William S. Burroughs, before his death, on an “word/image novel” called Ah Pook is Here (image above, top), based, I believe, on a short story by the same name (which was also the inspiration for an animated short by Philip Hunt). McNeill worked on the project with Burroughs intermittently for seven years. Unfortunately the project was eventually abandoned because of insufficient funding. The glimpse of the work is tantalizing. It looks like McNeill is playing with the comics narrative form in some interesting and novel ways.

McNeill is at work on his own graphic novel, 0º, and a non-fiction graphic narrative called 1%, in which he also seems to be playing with narrative conventions. It’s too bad that the images on the site are relatively small.

He wrote and illustrated a science fiction comic series called Tetra (above, two images at bottom, right) that ran in Gallery magazine for two years.

He has also done concept design for TV, including concept, design and art direction for the Saturday Night Live opening sequence in which the cast appeared as giants among the buildings of New York, as well as a number of commercial spots.

There are some nicely done illustrations for a dinosaur-themed project in the Kids section (above, image at bottom, left), for which he lists contributions of character design and script development but doesn’t indicate the name of the project.

Addendum: Malcolm has let me know that he in now in LA, not NY, he’s just completed a book about the collaboration with Burroughs, which took place in the 70’s, and the book will include the artwork in various stages of completion. The dinosaur images are for a book/film called “Pterrence with a P”, which he storyboarded, but has left to work on 0º. He also notes that anyone interested in contacting him for professional inquiries can simply ask for larger versions of the images.

Addendum 2 (9/11/07): McNeill has posted a sited devoted specifically to the Burroughs project, which is now spelled Ah Puch is Here. There is now a fairly extensive interview with malcom McNeill posted on RealityStudio.org, and another on George Laughead’s Beats in Kansas, in which he talks about collaborating with Burroughs.