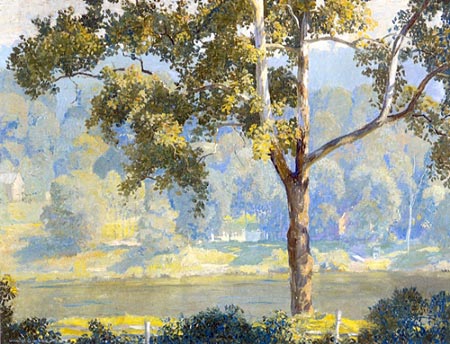 Pennsylvania is a beautiful state. It’s lush and green in the summer, bursting with color in the fall and in winter reveals gracefully rolling hills and mountains laced with the traceries of stands of deciduous forest.

Eastern Pennsylvania in particular, in the areas along the Brandywine Creek and Delaware River, has inspired two schools of artists, both of which flowered around the turn of the 20th Century: the Brandywine School of great illustrators, including Howard Pyle and N.C. Wyeth, and the landscape painters working in Bucks County in and around a small town called New Hope, that was something of an artist’s colony.

Notable among those painters is Daniel Garber. Perhaps you can call him an Impressionist, perhaps not.

The bright colors are there, as are the overt brushstrokes, the freshness and immediacy of images painted from life and the brilliant landscapes flooded with light and broken color; but like most American painters labeled “Impressionist”, I think he is… something else. I’m not sure I have a label for it, but “Impressionist” doesn’t tell the whole story.

Garber’s rolling Pennsylvania fields and verdant hills have an undercurrent of the Brandywine tradition, even if just from similarities in subject matter, but the overall effect and intent seem quite different from either that school or French Impressionism.

Occasionally his landscapes are bathed in light that seems so strong it’s as if the colors in the brightest areas were being bleached out, like an over exposed photograph. At times his canvasses seem to be broken up into planes of color, while still managing to be “realism” in some sense. Sort of like a collision between Cezanne and Alfred Sisley.

At other times, he can, indeed, look like an Impressionist, with sun dappled fields, wooded hills and reflective creeks exploded into a flurry of brilliant brushstrokes. Look again and you’ll find him painting like a realist, a very direct and painterly realist, but a realist nonetheless.

This becomes evident in Garber’s canvasses of interior scenes, in a vein somewhat similar to Edmund Tarbell, who also gets boxed and sold as an American “Impressionist”. Garber, again separating him from other painters usually placed in the same box, also established himself as a portrait artist.

Garber’s work is exceptionally beautiful, and if you live in the area, you’ll have a chance this Winter to see a major retrospective at the Pennsylvania Academy of the Fine Arts, where Garber studied and was eventually an instructor for 40 years.

The show is called Daniel Garber: Romantic Realist and runs from January 26 to April 8, 2007.

Garber’s work is often fairly large in scale, and the chance to stand in front of his canvasses and immerse yourself in his brilliant visions of Pennsylvania’s countryside is not to be missed.

One Reply to “Daniel Garber”