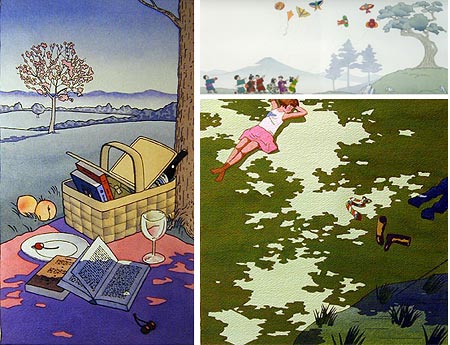 Simplicity is an enigmatic and elusive quality. We often say we admire and desire it, but seldom feel we have reached it.

French/Italian illustrator Yan Nascimbene manages to achieve that quality often in his serene and engaging illustrations that dwell on the enchantment of the ordinary.

Obviously very influenced by the simplicity and charm of Japanese woodblock prints, and probably the ligne claire style of European comics artists like Hergé and others, Nascimbene has illustrated dozens of books, as well as providing illustrations for publications like Time, Newsweek, The Wall Street Journal, Boston Globe and Atlantic Monthly, and advertising illustration for companies like IBM, Apple, Macy’s, Air France, British Airways and Bank of America.

He seems most devoted, however, to his illustrations for books by an Italian writer named Italo Calvino like Aventures, Palomar and Le baron Perché. I’m not familiar with Calvino, but after reading Nascimbene’s comments, I plan to check him out.

Nascimbene uses a deceptively simple line and beautifully controlled atmospheric color to draw us into the magic within the commonplace. He has a fascination with rays of light, dappled sun and the subtle chiariscuro of midday summer shadows that enliven his compositions with a subtle rhythm and poetic geometry.