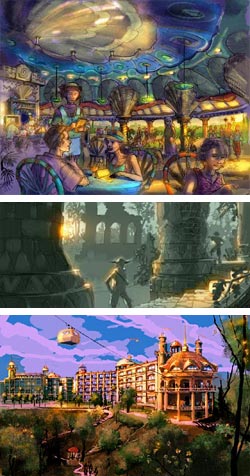 The term “concept art” is most often associated with movies and games, where the look and feel of characters and environments have to be established before they can be realized in costuming, sets and special effects. In fact, it’s even more important in the planning stages, when the effectiveness of a look is being judged in making choices about visual direction that will achieve the best effect for the story.

In a similar way, creators of entertainment theme parks and resorts need to visualize and assess the intended look of environments for their physical spaces, with much the same intent, the amusement and visual entertainment of their patrons. So it’s not surprising that theme park creators also employ concept artists to help them craft their particular form of entertainment.

John Uibel is a concept artist an designer who has done work for films and television, but specializes in design concept illustrations for theme parks and resorts. His quickly realized color sketches seem to be somewhere between movie concept illustrations and architectural renderings. They are colorful, often very simple, and concentrate on the atmosphere created in addition to the physical characteristics of the proposed environment or structure.

His site is in blog format and he often posts his most recent images and discusses work in progress, at times with multiple versions of the images. He works primarily digitally in Photoshop and sometimes gets specific about technique in his descriptions.

I like the tagline for his site: “Not for the feigned of art”.

One Reply to “John Uibel”