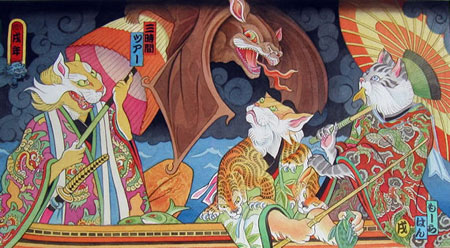 Moira Hahn was born in Boston and moved west, both physically and artistically, until west met east. She moved to California at one point to continue her education, studied animation as an addition to her BFA and, after working in animation and illustration for time, studied Japanese art in Hawaii and Japan for several years.

Her enthusiasm for Asian art extends to Persian, Tibetan, indian and Chinese art, but it is Japanese woodblock prints that most seem to inform her current gallery paintings, particularly Ukiyo-e (“pictures of the floating world”) with their colorful depictions of city life, entertainment and pleasurable pursuits.

Hahn’s work brings together the formal compositions, colors, dress, architecture and decorative elements of those prints with a very modern juxtaposition of elements. In most of the current images in her online gallery you’ll find paintings that almost look as if they could be traditional woodblock prints, except that the houses, rooms and landscapes are populated with animals, anthropomorphically dressed in the stylized and elaborately patterned kimonos and robes of traditional Japanese society at the time of the Ukiyo-e prints.

I don’t know enough about these prints, or others of the time (see my posts on Hokusai, Yoshida and Hasui) to know how accurate any of these representations are, but I do know that Hahn’s work is often laced with liberal doses of humor. Just the images of birds and cats in formal dress can be funny, but they’re made more so by the fact they the animals themselves, particularly the cats, are rendered with the kind of stylistic exaggerations usually assigned to images of tigers and lions.

You’ll also find pop culture references, like Astro Boy and Godzilla, popping up in her images (and in her titles, the image above is titled “A Three Hour Tour”). There are also humorous stories suggested in the relationships and situations portrayed in the images.

Hahn’s online gallery is arranged by time period, so you can follow back from the present (or forward from the 80’s) and watch her work progress through several phases and degrees of influence from various Asian arts.

Hahn also has a blog called sink hole on which she discusses art, exhibitions, travels and anything else that crosses her mind.

One Reply to “Moira Hahn”