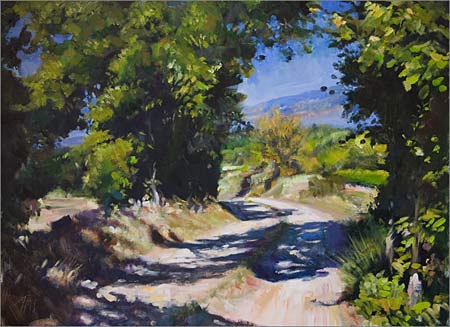 You will often hear people say that artists, in particular the Impressionists and post-Impressionists like van Gogh and Gauguin, found the quality of the light particularly appealing in Provence, that area in the south of France that was the first province established by the Romans outside of Italy.

I have to say that I was skeptical of this until I visited the region around Arles a few years ago and experienced it for myself. There really is something extraordinary about the light there and the effect it has on the appearance of color in the area’s beautiful landscape, and I can easily understand why artists find the region particularly appealing.

Julian Merrow-Smith is an English painter in Provence. (Sounds like it should be a Sting song, doesn’t it?) He paints in a direct, Impressionist influenced style that is spare on details and rich in color and light.

His deceptively simple compositions are wonderful expressions of how much can be suggested with a minimum of brush strokes. (The image above is actually one of his more elaborate paintings, I just happen to really like it.) He pulls short of flattening his compositions into planes like Cezanne, who is obviously an influence, and leaves enough suggestion of detail to keep them vibrantly three-dimensional; creating in his landscapes scenes that are at once inviting to walk into and yet obviously paint on a surface.

He paints the countryside in and around his adopted home of Crillon le Brave, a small village in the hill country in the south of France, with an eye to the extraordinary in the ordinary. He has recurring theme that I particularly enjoy of compositions that find rich contrasts in the shadows of trees laying across roads or paths in the warm light of the Provence sun.

Merrow-Smith also paints still life and portraits, but as much as I like his other work, particularly his small scale still lifes, it is the Provence landscapes that I enjoy the most.

His portraits have a rough-hewn appearance, as if the paint were applied like a sculptor adding clay with his thumb. His still lifes range from very simple compositions of a few objects to the more formal large scale paintings that were commissioned by Cunard to hang in the Britannia Restaurant aboard the Queen Mary 2.

In a practice that goes back almost as far as, and I think is independent of, Duane Keiser’s “Painting a Day” project, Merrow-Smith has been posting his small postcard-sized paintings on his “Postcard from Provence” blog. Although not strictly daily, he has kept pretty close to that, and, more importantly, kept a high-level of quality and consistency.

Like Keiser and the growing number of “painting a day” adherents who are following in their footsteps, Merrow-Smith puts his small paintings up for sale on the blog as he creates them. Unlike Keiser, (and much to my amazement) he has not allowed demand to raise his price much and still offers his small works at $120. He sends out notice of new paintings to a mailing list of subscribers where they are, not surprisingly, snapped up within minutes of being posted. He also sometimes photographs the works and makes them available as limited edition prints.

The paintings on the Postcard from Provence site can be viewed by category, so you can contemplate his serene still lifes and intimate flower studies, relax by the Mediterranean or talk a walk through the sunlit fields of Provence.