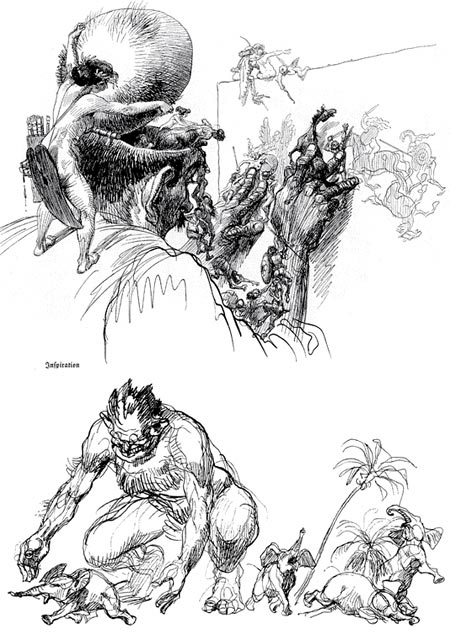 The relationship of humanity to the natural world is receiving a bit more attention these days, as it becomes clearer that we’re not cleaning the big cat-box we’ve made of our Eden. Artists are often quicker to notice these things than others and some have been pointing out that strained relationship for a long time.

Heinrich Kley was an Austrian artist with a background in portraying modern industrial life around the turn of the last century, when the industrial revolution had made that separation of humans from nature stand out in sharp relief.

Kley’s brilliant satirical drawings often portrayed humans unclothed and other animals in finery or in anthropomorphic situations, pointing out the similarities and differences, often in a way that was not flattering to the human side of the equation. He was adept pointing out our foibles with a simple image and perhaps a brief caption.

Kley was a wonderful draughtsman, whether drawing highly rendered pen and ink compositions or conveying sophisticated ideas with a scant few lines, his beautifully fluid ink line glides across the page like marks left by the movements of a graceful ice dancer.

Kley’s bizarre and imaginative juxtapositions of humans and other animals, engaged in social situations, dancing, eating or in bizarre dream-like and surreal situations, were printed in Simplizissimus and Jungend, popular satirical magazines of the time. Kley also illustrated several books.

Walt Disney was introduced to Kley at one point and became an avid collector of his work. The influence is dramatically clear, particularly in works like Fantasia, where you can see Kley’s drawings of women dancing with alligators translated into the beautiful and hilarious “Dance of the Hours” sequence which featured hippos waltzing with alligators (brilliantly animated by Preston Blair — more on him in a future post).

As a quirky pen and ink artist from the turn of the 20th Century, Kley is the kind of artist who is often lost from view. Fortunately good ol’ Dover Books comes through again, keeping his work in print in a terrific and very inexpensive edition, The Drawings of Heinrich Kley (a steal at $15). The second volume, More Drawings of Heinrich Kley is out of print but you should be able to find it used.

There is also a nice tribute online, courtesy of the good folks at Coconino World, and a few other web resources. It’s worth looking for the books, though, even if in the library. The online images tend to be too small to get a real feeling for his beautiful ink line, and the books offer translations of the captions, which often brings the point of the drawing into focus, despite cultural differences between the modern world and Austrian society of 100 years ago. (The image above, top, is captioned “Inspiration”.)

In a career path that is something of the opposite of many artists today, Kley started as a gallery artist, moved into cartoon drawings and editorial illustrations and then into other areas of commercial art. The satirical drawings for which he is most renowned were largely the product of a ten year span.