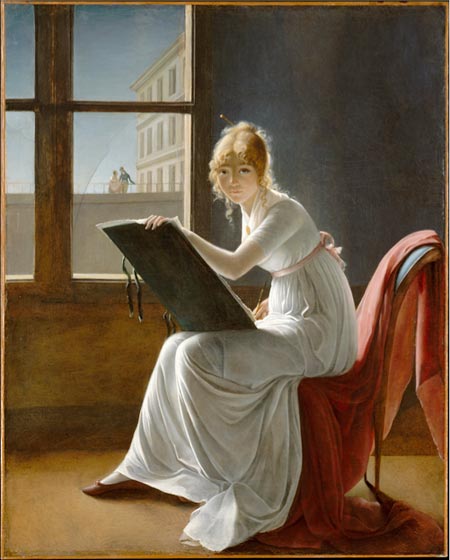 I used to think this was my favorite painting by Jacques-Louis David. I was mistaken.

But then, so were art scholars who for years had attributed it incorrectly to David and subsequently decided that it was the work of Marie-Denise Villers, a French portrait painter about whom little is known.

We tend to think of art history as immutable, set in stone, perhaps literally. But history, while not exactly a science, is like science in that new evidence, and sometimes just new thinking about existing facts, can change things overnight.

Prior to the change in attribution of this work, not much attention was focused on Villers and I haven’t had much success in searching her out on the web, other than to find dozens of references to this particular painting. We know that she was a student of Anne-Louis Girodet-Trioson, called Girodet, who was in turn a pupil of David’s. You might add that Villers was a very talented student, given that her work had been mistaken for that of David by art historians.

She painted for a while under her maiden name of Lemoine and later took the name of her husabnd, architecture student Michel-Jean-Maximilien Villers. Her portraits apparently attracted favorable attention when she exhibited in the Salon as a student of Girodet. She carved a niche for herself with paintings that combined some of the characteristics of portraits and genre paintings, which she called “studies of women”.

You will still find this painting in books listed as a portrait of Charlotte du Val d’Ognes by David. The Metropolitan Museum of Art in New York, which has the painting in its permanent collection, now attributes it to Villers and lists it as simply “Young Woman Drawing“.

The painting is striking. It’s large, 63 x 50 in. (161 x 128 cm), and when you enter the gallery in which it hangs, the painting is facing you on the opposite wall. It’s hard not to be struck by the luminous figure of this beautiful young woman, drawing board in hand, the folds of her white dress bathed in the soft light from the window behind her, who is gazing directly at you, as though you were the subject of her drawing.

Not knowing anything about the painting, I had made an assumption that here was a student of David’s, drawing the master as he, in turn, painted her. It now seems more likely that the painting is actually a self portrait, an idea that just feels “right” when you look at the painting with that in mind.

Artists’ faces often have a certain look to them in self portraits, due, I believe, to a shift in consciousness into a mode of perception associated with artistic seeing (see my post on Drawing on the Right Side of the Brain). The woman might have that look whether she was drawing herself or another, but the semi-hidden position of her drawing hand and other elements just make it feel like a self portrait now that the idea of attribution to David is removed.

I certainly hope the Met doesn’t move this striking painting now that it’s assigned to a “lesser” artist. I think we need to supplement our art history with some literature and remember Shakespeare’s lesson that “a rose by any other name would smell as sweet”, and a beautiful painting by another artist’s name is still a beautiful painting.

Addendum: I’ve come back and added what resources I could find on Villers as of November 2009 to the list below, and replaced the smaller image I had here with a new version from the Met’s updated site. There is also now a zoomable image of the painting. I’ve also written a new post about Marie-Denise VIllers.