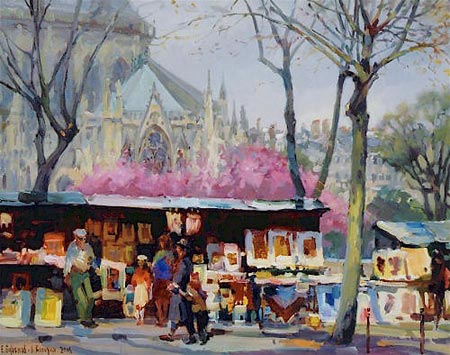 Many art forms can be collaborative, film production, musical performances, mainstream comics, animation and others can be the culmination the efforts of several artists working together in varying degrees.

Collaboration in painting is usually more one-sided, as in a master being aided by an assistant, a master touching up the work of a pupil or a figure painter employing a specialist to paint animals into a composition (as Rubens did); all are examples of one dominant painter and one helping. True collaborative painting, in which the same painting is worked on by two artists working in tandem with equal input, is rare.

Husband and wife Evgeny and Lydia Baranov, who are originally from Russia but now live in California, seem to have achieved a balance that allows them to do just that. They work side by side on the same canvas, which might be started by either, sharing the application of paint and the advancement of the composition in an interplay they liken to improvisational jazz.

They seem to work and think alike enough that the intention and execution of the paintings feels of a whole, like the work of a single artist. They apparently travel extensively and their work includes landscapes and cityscapes from Paris (image above), Russia, Venice and other parts of the world, in addition to their adopted home of California.

Their online galleries also include intimate interiors and still lifes, occasionally combined with exteriors in the same composition as in their “Moscow Windows” series. Their work also includes portraits and figures in the context of interiors or landscapes. Their approach is painterly, with broad strokes of intense color laid down directly, space and form defined with areas of color and little evidence of line.

I don’t know if someone more familiar with their work than I could pick out the influences of one artist over the other. Their site sometimes arranges their work by date, and I see more variation in style over time than I do in a given year, indicating to me a pretty seamless synthesis of the vision of the two artists into a shared whole.

It’s interesting to compare this approach to that of two other artists I have featured who are husband and wife, Neil and Karen Hollingsworth, who obviously share influences, but retain separate artistic points of view. I think it’s rare enough to find couples who work in the same medium and general style; the Baraov’s joined expression is very unusual.

One Reply to “Evgeny and Lydia Baranov”