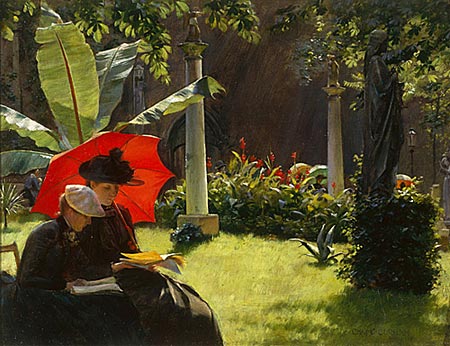 I was happy I had the opportunity to see the terrific Americans in Paris exhibit at the Met in New York this Fall (continues to January 28, if you get a chance, see my previous post).

In the midst of being dazzled by dramatic, large scale works by such luminaries as John Singer Sargent, John White Alexander, James McNeill Whistler and Childe Hassam, I found myself drawn to two small scale works by an artist with whom I was only marginally familiar, Afternoon in the Cluny Gardens, Paris (image above) and In the Luxembourg Garden by Charles Courtney Curran. (The links for the two images are to pages related to the exhibit on the Met’s site.)
[Addendum, 2012: Americans in Paris archive at the Met is now here.]

On returning home, I looked up Curran and was a bit disappointed to find only a relatively small amount of material on the web, but there is some.

He was born in Kentucky, spent his youth in Ohio, trained in New York City at the National Academy of Design and the Art Students League and eventually settled in Cragsmoor in New York State. He was a leader of the Cragsmoor Art Colony. He obviously spent some time in Paris, where he studied at the Académie Julian.

His subjects are often well-dressed young women amid gardens and flowers. He was very popular during his lifetime and is one of the artists credited with reviving the tradition of genre painting (the depiction of everyday scenes) in American art at the time.

His painting sensibilities seem to carry some flavor from both French Impressionism and Salon style Academic art. Contrast works like Lotus Lilies and Ladies on a Hill with The Goldfish and Fair Critics.