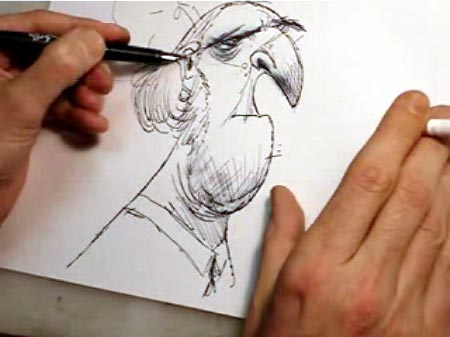 Uli Meyer is an animator, director and the founder of Uli Meyer Studios, a commercial and feature animation studio comprised of a group of talented animators and artists.

Meyer has produced or worked on over 300 commercials, many of which you will immediately recognize. as well as animated films like Who Framed Roger Rabbit, American Tail 2, Space Jam and Anastasia; and also supervised the CGI animation for the “Spider Smith” sequence in Lost in Space.

He is best known for his wonderfully stylized 2-D character animation. You can see a gallery of his character drawings if you go to the “Artists” section of the site, click on “Uli Meyer” and then on “Sketchbook”. (I can’t give you a direct link because the site is in Flash.)

You will also find lots of short animations and animated commercials throughout the site, both by Meyer and the other talented animators on his staff. (Note in particular Neil Ross, who I will do a separate post on.)

Meyer also has a blog, UMBACKAGAIN , in which he posts sketches and drawings, and which recently included Uli Doodles (images above), a short YouTube video of him drawing a character. You can also see it here on YouTube.

I’m not sure, but it looks like he’s using a Rotring Art Pen, which I can vouch for as a very nice sketching pen. (The other object he’s holding is a cigarette, which he apologizes for in the post.)