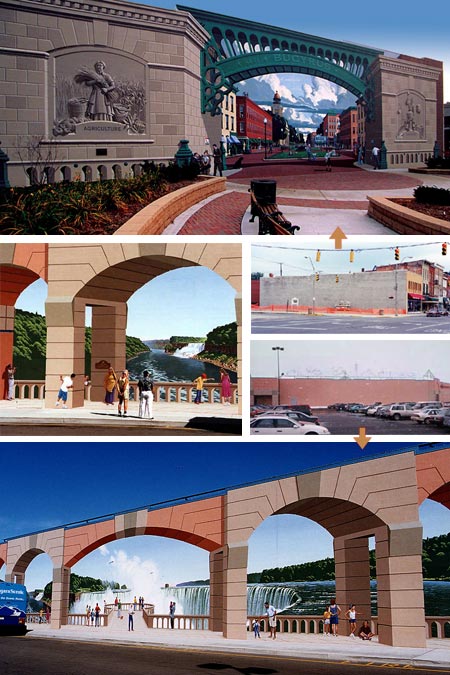 In the image at top, the plants, low retaining walls, benches and sidewalk are real. Everything else, the stone structures with their carvings and decorative elements, the ironwork bridge and the entire city street and sky behind them, are an image painted on a flat wall.

The decoration of walls with murals, both exterior and interior, is well thought of when considering the great muralists of the past, but often not appreciated in artistic circles when performed by contemporary artists.

Many cities have public mural programs, both to discourage grafitti and to beautify otherwise drab buildings and blank walls. (There is a prominent mural program here in Philadelphia.) Usually, however, these are conducted by teams of neighborhood volunteers under the guidance of artists who are often professionals, but seldom professional muralists.

Eric Grohe is a dedicated muralist, and paints murals of a different scope and intensity. In the course of a career as an illustrator and graphic designer, Grohe was asked to design graphics for Expo ’74 in Spokane, Washington. This and subsequent commissions led him to devote himself to the creation of large scale trompe l’oeil (“fool the eye”) murals on public buildings, corporate architecture and occasionally private residences.

His commissioned murals are often in, and simultaneously of, public spaces. Great American Crossroad (image above, top), depicts a historic view of the town and helped transform an empty parking lot and blank wall into a vital civic space in Bucyrus, Ohio. You can see the wall’s former state just below and to the right.

Under that is the wall of a shopping mall in Niagra, New York, transformed into a dramatic series of arches framing a trompe l’oeil view of the famous falls and river.

Grohe’s murals often include painted people within the architectural spaces he creates, and in photographs it’s sometimes difficult to tell them from real observers, like the two standing in front of the view of the Niagra river in the detail above, middle left. They are the ones casting shadows on the sidewalk. The kid sneaking a peak around the trompe l’oeil column, and the other “tourists” are painted. All of the figures in the long view at bottom are painted.

Somehow, when looking at these illusionary spaces painted at street level, I can’t help but think of those hilarious Chuck Jones Warner Brothers’ cartoons, in which the Road Runner would paint an image of a road or tunnel on a rock face and run into it, leaving the hapless Coyote with a hard lesson in trompe l’oeil painting and Newtonian physics.

Grohe has a firm now, specializing in the creation of large scale murals, and utilizes special type of paint developed in the 19th Century called Keim Mineral Paint (more info here), that changes its chemical structure in such a way that it will not fade or peel like ordinary paints.

There is a gallery of work on his site. Most of the projects feature several views so you can see the “before” state of the surface and also get a feeling for the scope and ingenious false perspective of the finished work.

There is also a post here with some of the views posted on a single page from which you can get a quick overview.

One Reply to “Eric Grohe”