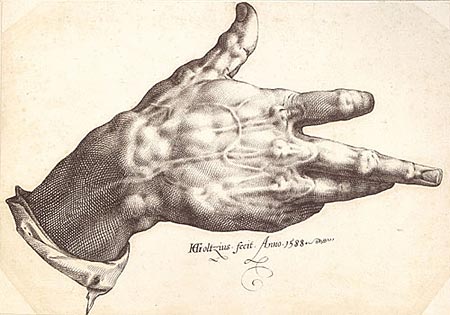 Despite the fact that he was limited to the use of one hand, his other having been crippled by fire, 16th Century Dutch artist Hendrick Goltzius was a master of the art of engraving, as well as a supremely accomplished pen draughtsman.

He was also accomplished at drawing with chalks, notably the “trois crayon” method of drawing with black, red and white chalks on tinted paper to achieve a painting-like effect, usually for portraits or figures. In his later years, Goltzius left engraving to devote himself to painting, but never achieved a mastery of that medium comparable to his extraordinary accomplishments with burin and pen.

Goltzius was very impressed with the work of Michelangelo, which he encountered on a trip to Italy. Many of his works are influenced the Italian master’s more strained and convoluted figures, and his most dramatic examples of foreshortening.

It is in Goltzius’s own command of the engraving burin and drawing pen that he really shines, though. He brought ink techniques, like the use of varied width lines, to engraving; and his ink drawings are amazing emulations of the line style of engravings, like the extraordinary pen drawing of his crippled right hand (image above), for which you can see chalk studies here.

Like most artists of his day, many of his chalk drawings were preparatory for finished works, like this chalk study for his famous engraving depicting the lost classical sculpture known as the Farnese Hercules (Wikipedia article)

Goltzius did a number of remarkable large scale “penworks”, pen and ink drawings, often drawn on specially prepared canvas and colored with delicate washes of transparent oil. These were done a much larger size than was common for ink drawings, as in the striking Without Ceres and Bacchus, Venus Would Freeze, acquired in the early 90’s by the Philadelphia Museum of Art, which is 41 x 31 inches (105 x 80 cm).

He also did large panoramas of landscapes in his native Holland, which were some of the earliest of their kind and helped pave the way for great Dutch artists to follow, like Rembrandt.