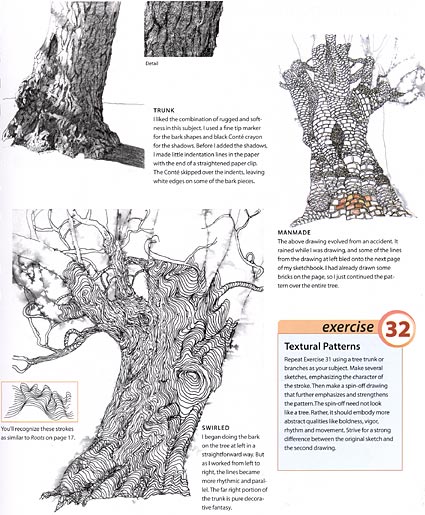 I received a review copy of Keys to Drawing with Imagination by Bert Dodson from F+W Publications.

Bert Dodson is a painter, illustrator, teacher and author whose previous book on the subject of drawing, Keys to Drawing is a standard in the field of popular “how to draw” books. In a vein somewhat similar to Betty Edwards’ Drawing on the Right Side of the Brain, it guided you through 55 “keys”, or principles, that were designed to help you see what is actually in front of you, and to draw what you see. It was also designed to stimulate and encourage you, and to have you participating, drawing, right from the start.

Although it too encourages immediate participation, the intention of Dodson’s new book, Keys to Drawing with Imagination: Strategies for Gaining Confidence and Enhancing Your Creativity, which I may refer to by the more succinct title, Drawing with Imagination, has a different aim. This is not a “how to draw” book for novices, but, as the title suggests, a course in drawing with, and from, your imagination, and is essentially an extension and elaboration on themes begun in his previous book’s last chapter.

Anyone who has tried to come up with concept art for movies or games, design scenes or characters for comics, create imaginative editorial or advertising illustrations or even produce gallery art that deals with the imaginary or the imaginative interpretation of the real, knows that “creativity” can quickly go from an abstract concept to a very real and formidable challenge, particularly when you are faced with deadlines and the prospect of “creativity on demand” (an oxymoron if ever there was one).

Dodson seeks to address that situation with a course in imaginative thinking. Unlike many books on creative thinking that try to appeal to writers, business people and a very general sense of “creativity”, this one is focused specifically on drawing. Perhaps most importantly, it is focused on the process of drawing, and how that process can be, in itself, a creative process.

The book is obviously meant to be used, not read. The publisher has gone to the extra length of making it spiral bound so it can be laid flat on your drawing table, within a hard cover that has a flat spine so it can be seen on the shelves in the bookstores.

Like the original Keys to Drawing, Keys to Drawing with Imagination is divided up into short exercises that encourage you to jump in and begin doing immediately, putting thinking aside for the time being. The free generation of ideas, without interference from the critical part of the brain, is one of the long established principles for encouraging creativity. In fact, most of the creativity enhancing principles in the book are not new (which Dodson readily acknowledges). What is new, and makes Drawing with Imagination successful, is the concrete and immediate instructions and exercises for applying those principles through the practice of drawing.

If you are used to skipping introductions to books, make an exception for this one; as Dodson’s intro serves as a concise two page essay on those principles, and acts as a key, if you’ll excuse the expression, to the rest of the book. His exercises encourage you to take the familiar and make it into the unfamiliar, whether by extending doodles into more realized drawings, combining existing drawings, reversing and adding to sketches from life, combining forms, adding elements of texture and shading in novel ways, abstracting simplified graphic elements out of more complex ones, or any of a number of other ways he has laid out to encourage idea generation while drawing.

One of my reservations about Dodson’s previous book was that I thought the drawings chosen to accompany the text could have included more gems from the masters, and I wondered if he perhaps felt that very accomplished drawings might intimidate beginners. Here he has taken an interesting tack and chosen, in addition to his own drawings, examples to illustrate his points from unexpected sources, like M.C. Escher, underground comix artists Victor Moscoso (a personal favorite) and Robert Crumb, classic newspaper comics genius Winsor McCay, illustrators George Dugan, Steven Guarnaccia and Trina Schart Hyman, storyboard artist Michael Mitchell and gallery artists Zelma Loseke and Mya Lyn, among others.

You can preview some sample pages on the Bert Dodson Studio site (although the image files on the site are of inexplicably poor quality, and don’t reflect the way they appear in the book).

Though not necessarily for everyone, artists who deal in imagination and the imaginary, as well as those who want creativity enhancing exercises based directly on drawing, should take a look. It occurred to me while initially thumbing through the book, that here are a few hundred potential levers to wedge your way out of “stuckness”. The “key”, of course, it to take up pencil or pen and apply them.

7 Replies to “Keys to Drawing with Imagination by Bert Dodson”