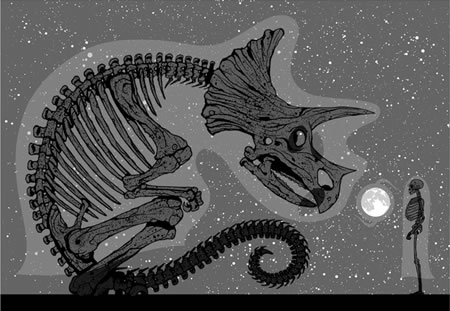 The “About Me” section of Dan McCarthy’s web site simply has three photos of him pulling screen prints, a photo of a dog (presumably his), and the unhelpful legend, “more soonish..”.

Not very informative, but the prints are pretty much the story. Though there are sections of posters, paintings and even T-shirts on the site, they all seem to carry the flavor of his prints.

The prints themselves are very graphic, beautifully designed and often carry themes of trees against the night sky and, a subject I’m always keen on, dinosaurs, particularly as portrayed in the form of their skeletal remains. The one above, for example, is a 4 color screen print on 100lb Stonehenge printmaking paper (a wonderfully textured paper that I like as a drawing paper for chalk and conté). Oddly, McCarthy doesn’t indicate the size of the edition on the pages that describe the individual prints, but some of them are listed a sold out, so I presume the runs are reasonable numbers (I don’t know the limits of current screen printing materials).

Check out this fascinating print (unfortunately sold out) that is essentially a short graphic story, the biography of a carbon atom.

His posters share some of the same themes, notably skeletal winter trees and skeletal paleo images. Even his paintings are very graphic and share the same thematic direction.

His drawings are a bit different, but I’m particularly fond of them. They remind me very much of drawings I used to make when I was younger, of telephone wires, poles and transformers. (I was just fascinated with the idea of lines drawn across the sky.) Mine were just sketches, though. McCarthy’s are more fully realized silhouette drawings, carefully composed and strongly designed.

McCarthy’s “news” page does seem to have a recent update, and lists newly added prints, so maybe the “more soonish..” promise will be realized with more images and a bit of background about this fascinating artist. Until then we’ll have to extrapolate, like paleontologists, from the bones we can find.

Link via Paleoblog and Drawn!