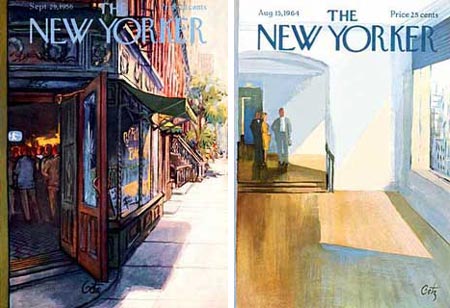 I love New Yorker covers. For years the venerable magazine has been featuring illustrations, often by cartoonists and illustrators working in a cartoon-like line and color style, that can be funny, poignant, beautiful, wistful and, at their best, reminders of the beautiful in the ordinary, glimpses of commonplace scenes that are suddenly brought into light as remarkable and worthy of attention.

Over the years some of the most effective of the latter have been by Arthur Getz. Getz was an illustrator and painter who created more New Yorker covers than any other artist (213). His palette ranged from the darks of night scenes to the bright, almost bleached out light of sunny days. He had a knack for composing paintings out of scenes that other artists might never notice and painting them with a deceptively casual style that actually reveals a superb eye for composition, color and the effects of light.

In addition to his New Yorker covers, Getz did hundreds of pen and ink spot illustrations for the magazine, as well as illustrations for Esquire, Fortune, The Nation and other publications. He also created murals for public spaces, including one for the 1939 World’s Fair. He was also a well-respected instructor at the School of Visual Arts in NYC, the University of Connecticut and other schools.

Feeling his name as an illustrator would interfere with his gallery work, he exhibited his gallery paintings for many years under the pseudonym of his middle name, “Kimmig”.

Getz also illustrated children’s books, including four he wrote himself. There is a web site devoted to Getz’ work, maintained by his daughter, Sarah. One of the best places to see work is in the CartoonBank archive, from which you can purchase original artwork as well as prints of his remarkable New Yorker covers. There was also a nice piece about Getz in the New Yorker in 2002, called Cover Gallery: Glimpses of Light.